THERE’S nothing cheap or underwhelming about Ferrari’s new Portofino even if it is the Italian marque’s cheapest ride. At $400,000, this is the vessel Ferrari uses to lure competing-car-brand buyers into the “Ferrari” family. There’s certainly nothing entry-level about the way it performs. In fact, respected automotive reviewers have likened the Portofino’s get-up-and-go to the likes of such heavyweights as Ferrari’s 488GTB or 812 Super fast.

‘How on earth can Ferrari can make a car go so fast and still manage to keep the engine looking so pleasing?’

At its very core, however, the Portofino is built to make you smile. The feel-good mood starting at the front with the leering grill – just get a load of that grin! It sits in front of a neck-snapping V8 engine which has proven to be faster and more powerful than the California T it replaces. With almost 600 horsepower to draw on, the PortoFino can manage speeds of more than 300 km/h and hit 100 km from a dead stop in 3.5 seconds. So it’s no slouch. 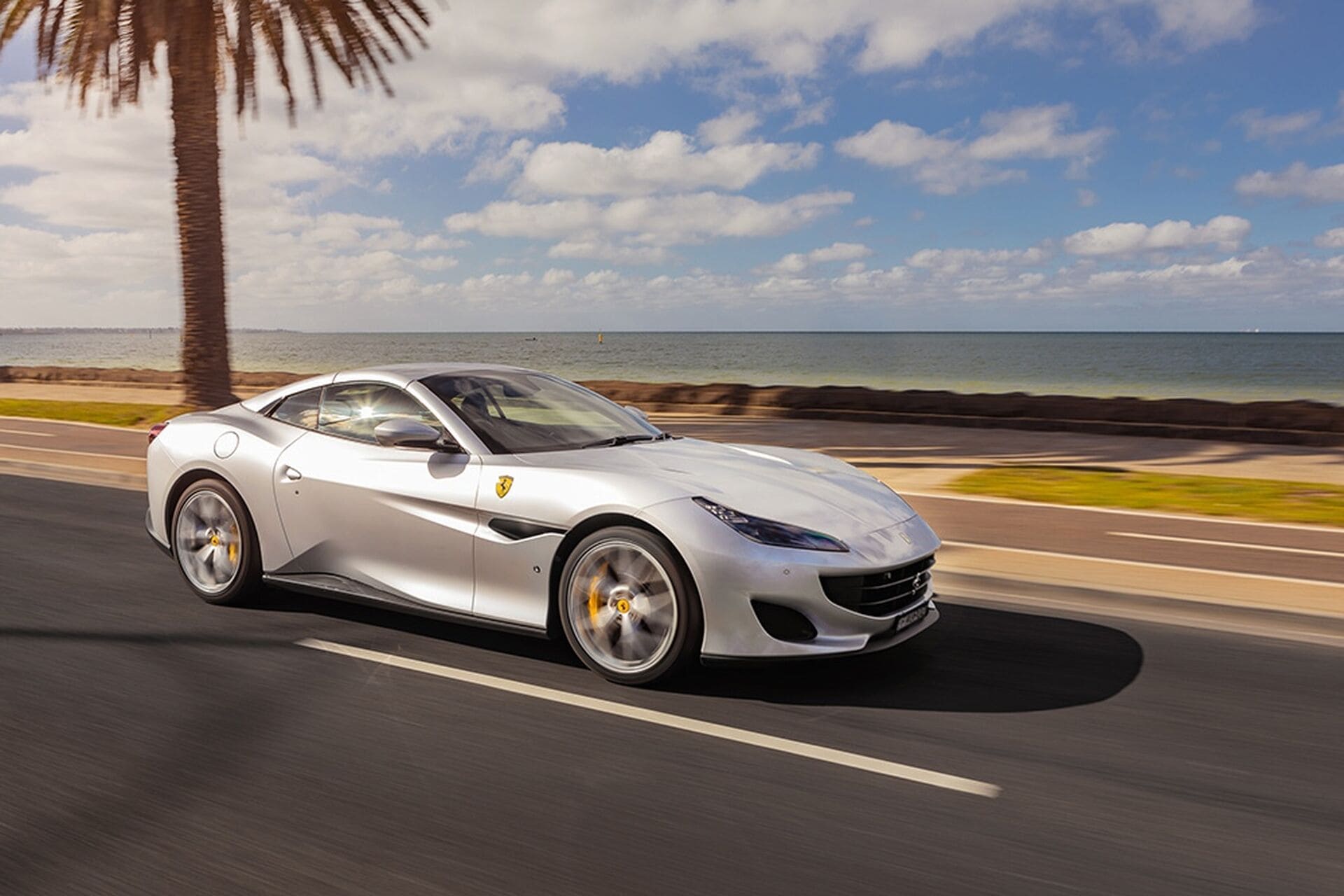 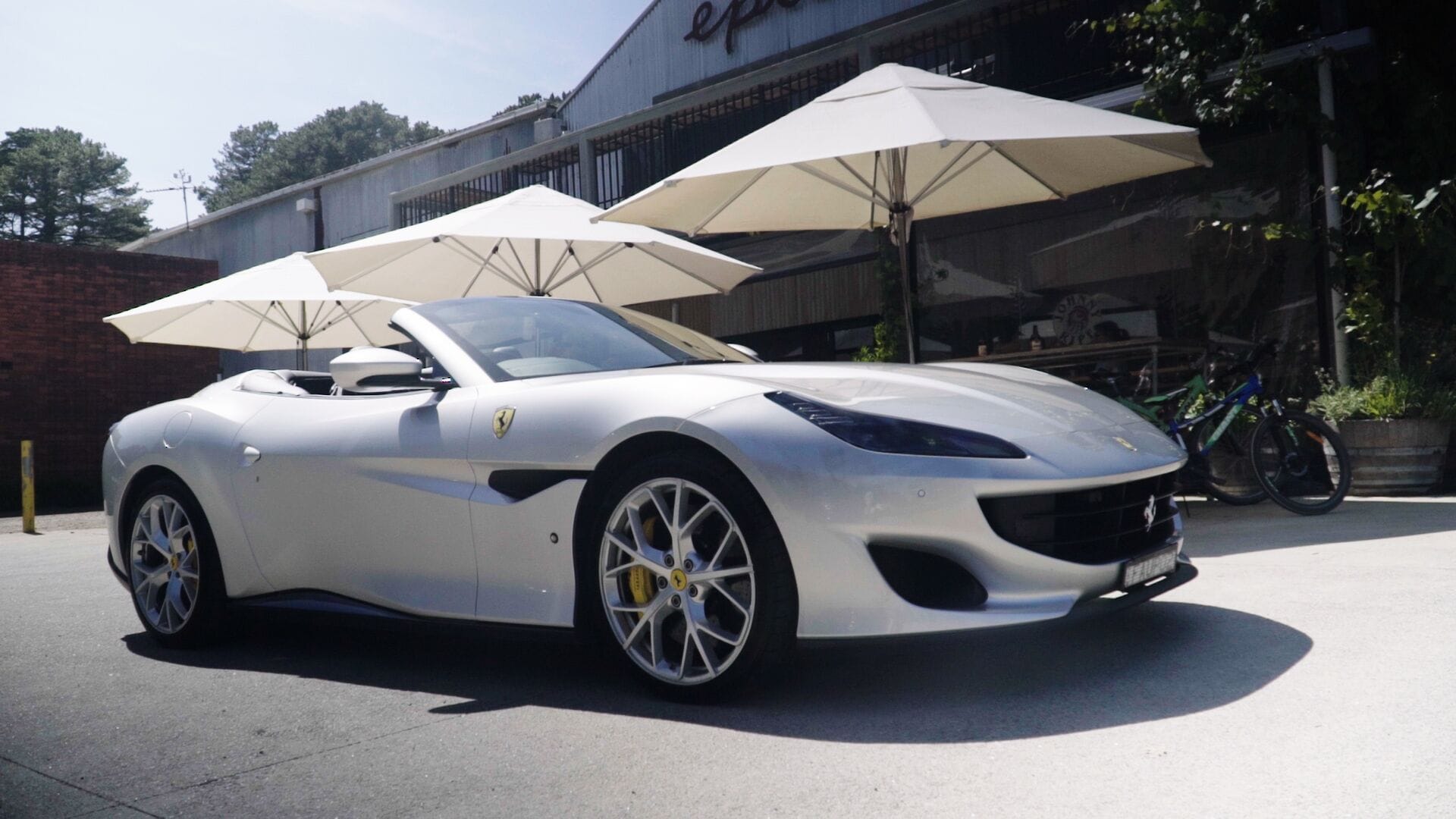 That in itself is joy-inducing, even before you pop the bonnet (no easy feat in this car, frankly, because of the oddly offset lever placement). Underneath lies an engine of implausibly wonderful symmetry and balance which leaves one contemplating how on earth Ferrari can make a car go so fast and still manage to keep the engine looking so … pleasing? It’s a typically Italian capability, I suppose. But keeping the engine on display rather than covering it with unsightly plastic panels seems nothing short of a masterful stroke on the design team’s part. No need to hide perfection.

That theme continues inside the car where all materials and finishes are soft, stylish and eminently suitable for a Ferrari. There’s even a special receptacle to encase the Ferrari-red key in velvet so it remains on view for the driver. A carbon-fibre steering wheel typifies what Ferrari’s been doing in all of its modern cars – getting as much functionality on to the wheel as possible. Even turn signals are controlled with the thumbs, which is quite a change from the more conventional stick indicators. It was also home to a neat feature borrowed from Formula 1 cars to indicate the point at which the driver need to up shift gears if driving manually (which, girls, I seriously hope you do from time to time). The LED strip displays a line of red lights which eventually glow blue at the top-end of the rev range, indicating the ideal point at which to up shift. 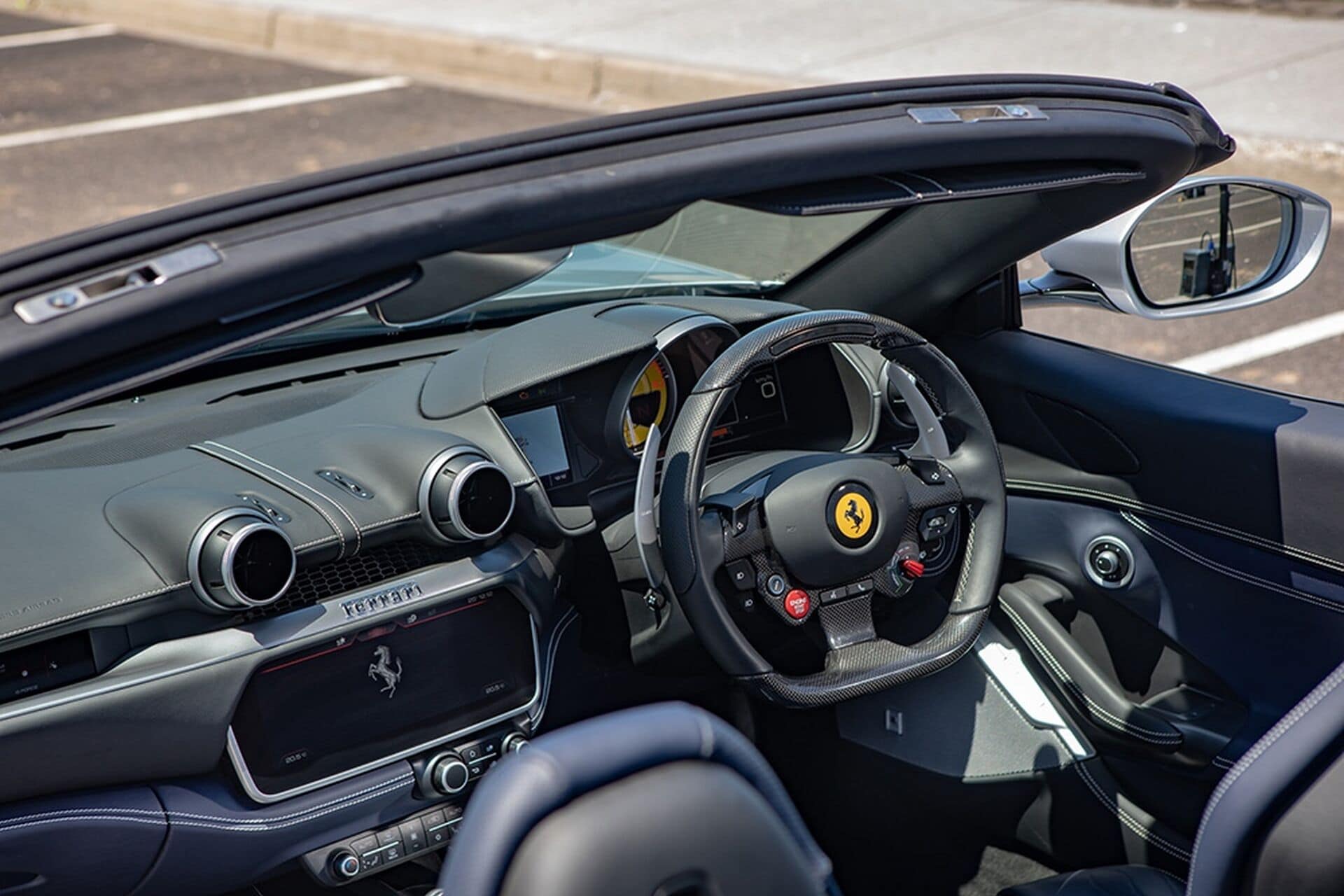 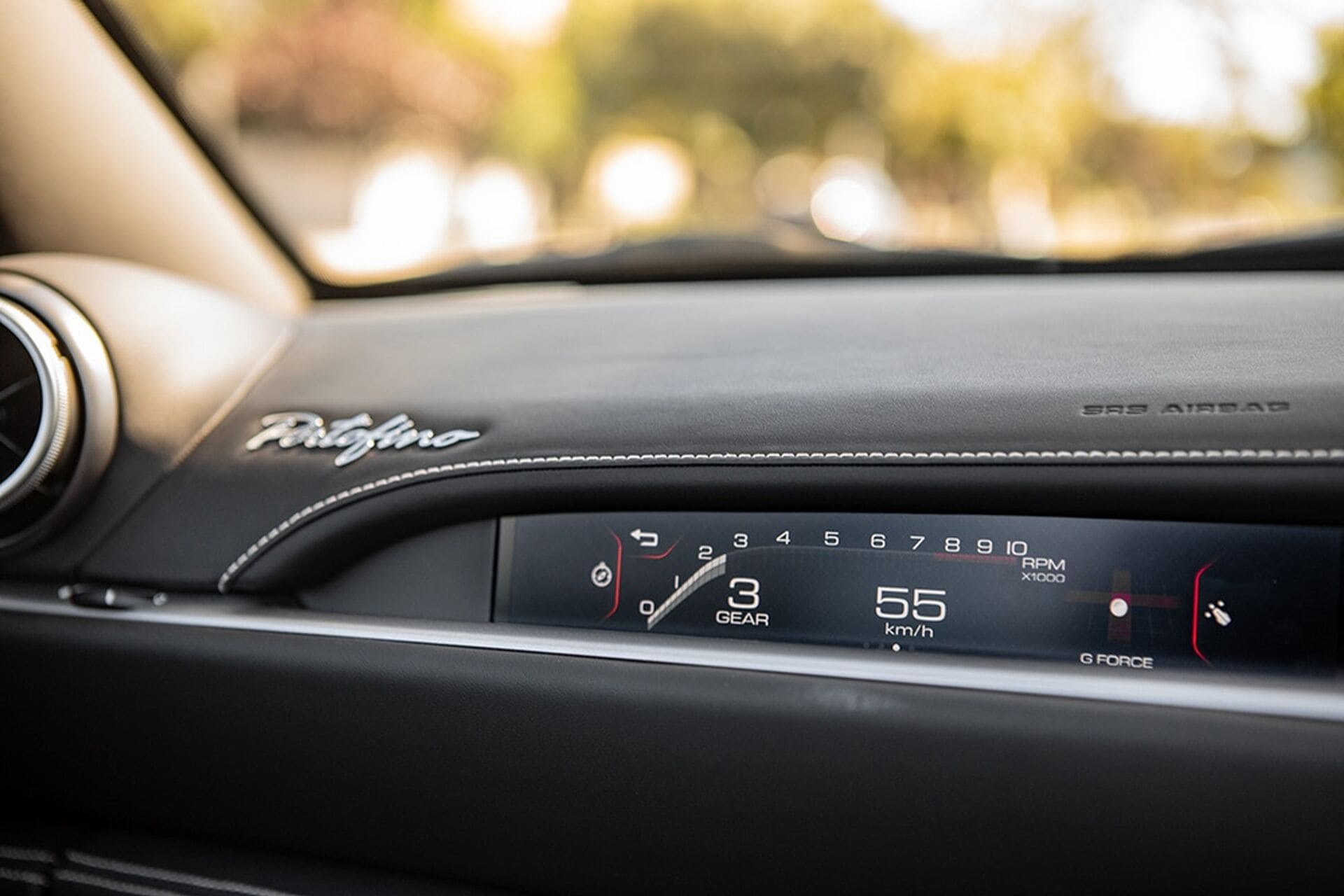 There are plenty of other digital gauges, dials and informative screens, most of which are configurable and require only a modicum of concentration to get across. A 10.3-inch touch-screen in the middle of the dash includes displays that go beyond navigation (which it does far better than before), and has a host of digital consoles for its systems. Included here is an incredibly sophisticated array of seat adjustments, along with the climate control screen which integrates a clever sliding temperature control graphic. For an extra $9500, you can put an additional screen in front of the passenger seat to keep your companion abreast of your speed, gear shifts, revs – all the fun stuff, really.

Speaking of add-ons, we thought it was a bit rich to expect people to pay additionally for two options which really should come as standard in a car of this stature: parking cameras ($7000) and Apple Car Play ($6800). Chinese cars include these things as part of the deal these days and so should the Europeans. When we mention this to Zagame’s Ferrari sales teams, they not unreasonably point out that it is precisely the Chinese car makers’ volume of cars produced that enable them to negotiate a better deal on these things over what low-volume brands like Ferrari can do. Anyway, very few Ferrari drivers are interested in Apple Car Play, they said. 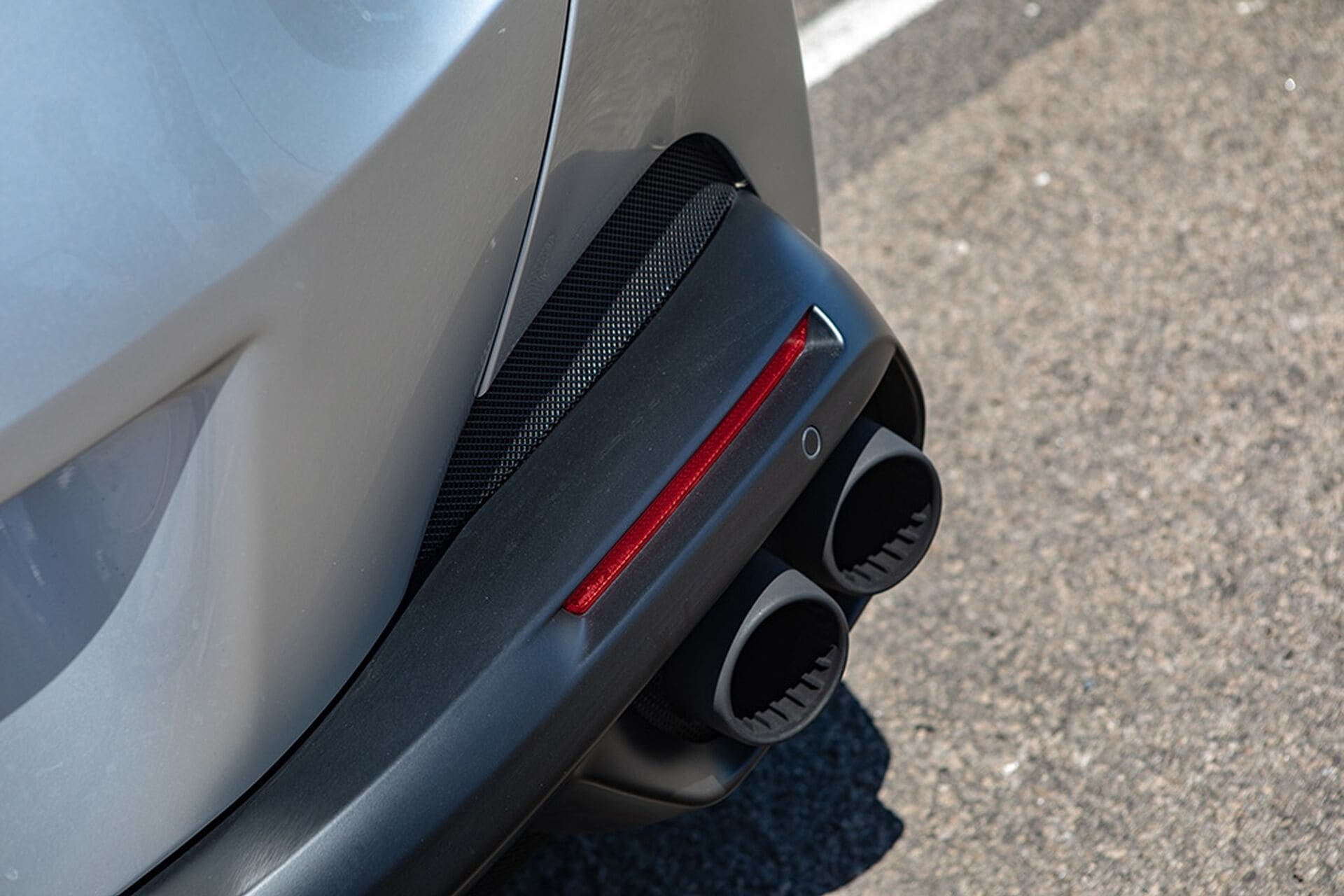 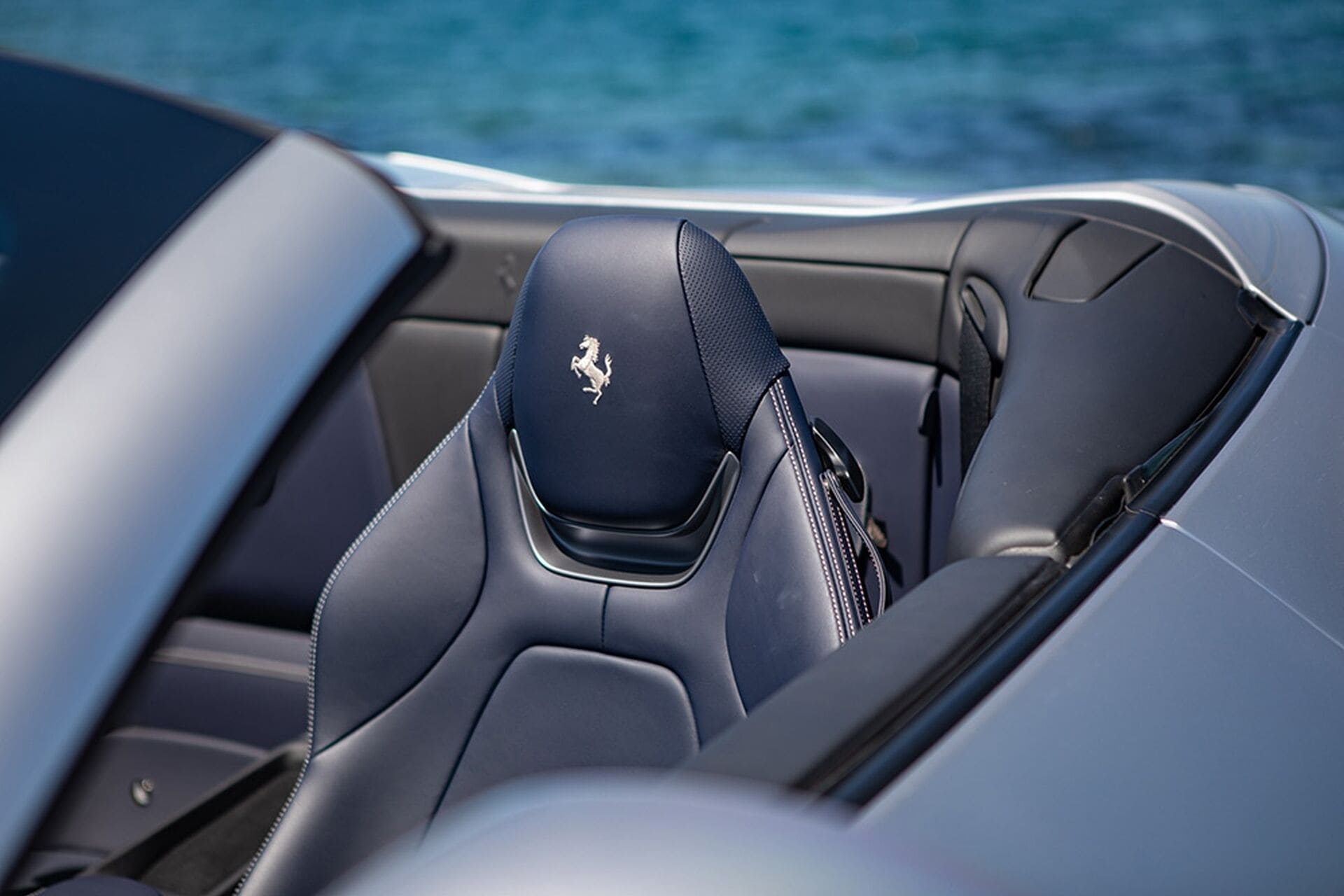 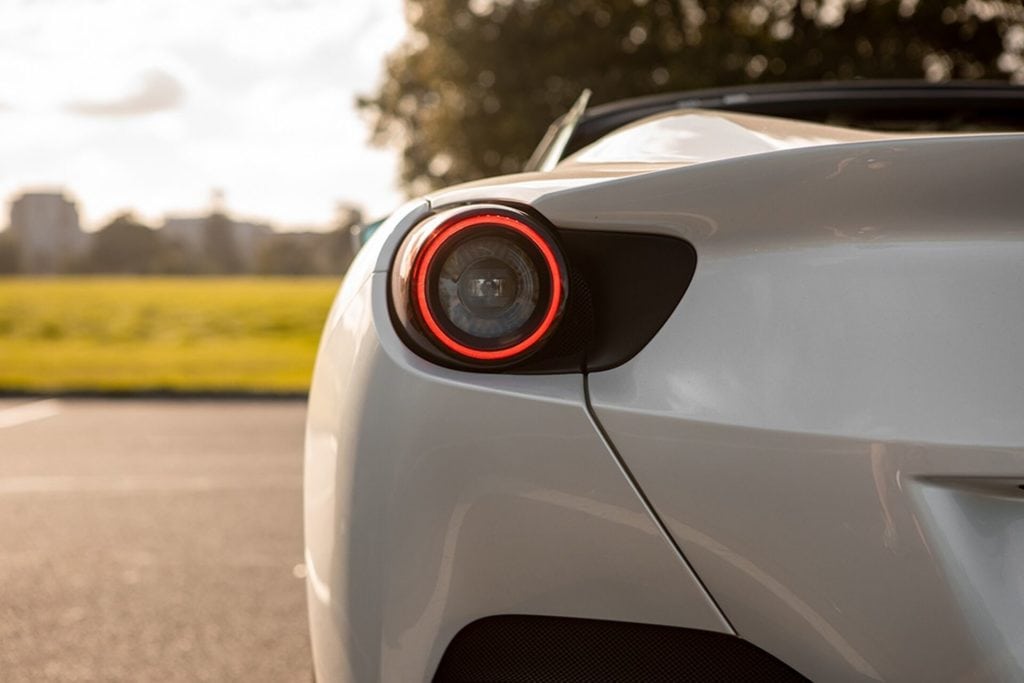 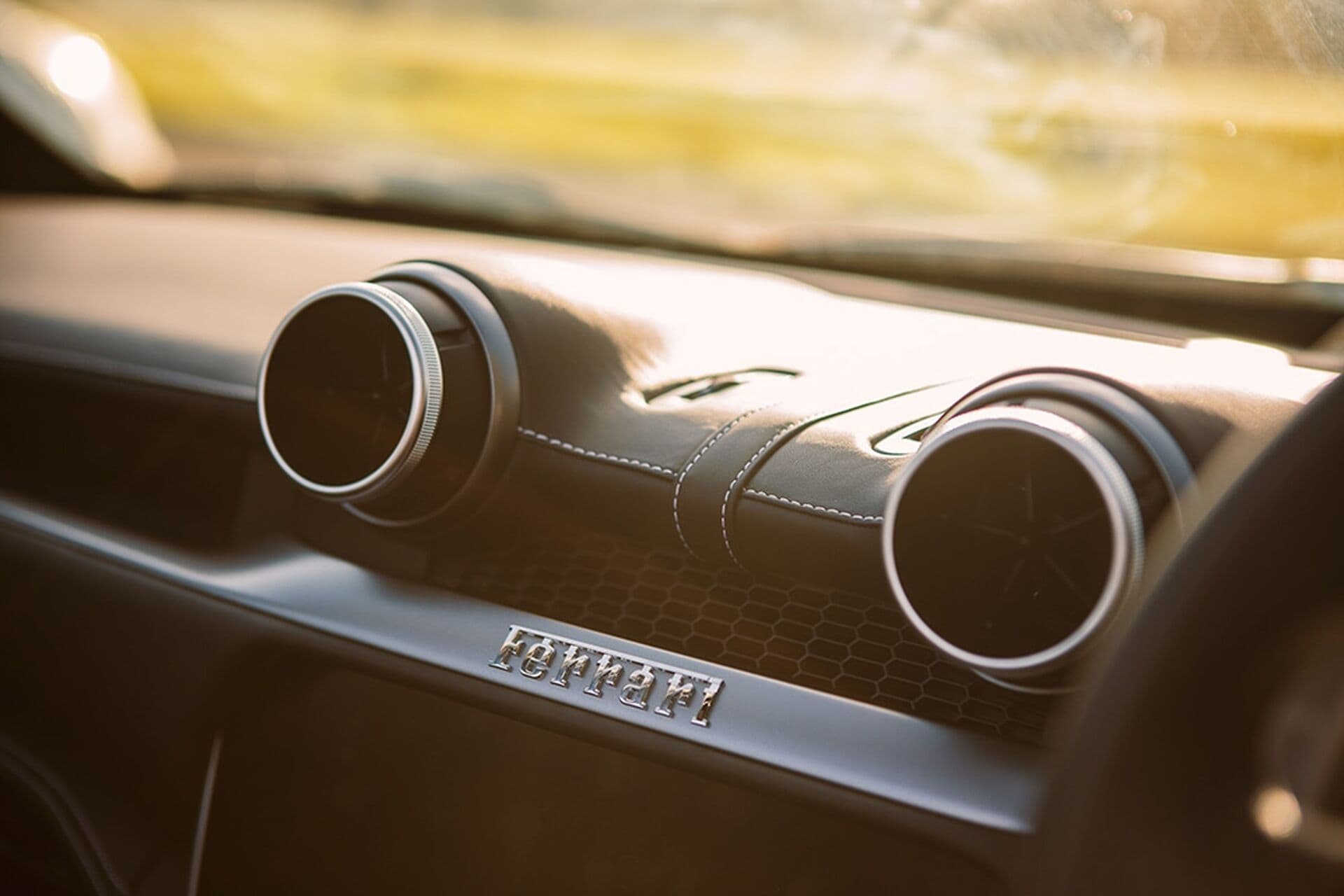 The Portofino has four seats but it’s really not fair to call it more than a two-seater. Madam Wheels climbed in and quickly determined it was no place for a 175 cm (5’8”) tall woman for any length of time. Her 12-year-old son claimed it might actually be good for his posture, it was so upright.

In terms of overall looks, this car is just beautiful to look at with the roof up or down (an adjustment either way which takes just 14 seconds with the push of a button in speeds up to 40 km/h). In the boot, a fabric capsule determines how much space is available if you want to put the top down, and can be lifted up to get more boot space. At the rear, a Ferrari plaque outlines all of the added features specific to that particular car. There’s even a tool kit and tyre patch for making repairs on the side of the road. At least you won’t get your hands dirty – Ferrari’s provided gloves. Of course.

On the road, the ride quality is top-notch and it feels absolutely like a daily drive. The steering is precise, direct and fast. And while it’s light, it always feels in control even though the acceleration is insane. The gear shifts are instantaneous, almost imperceptible in Comfort mode and snapping sharply in Sport. 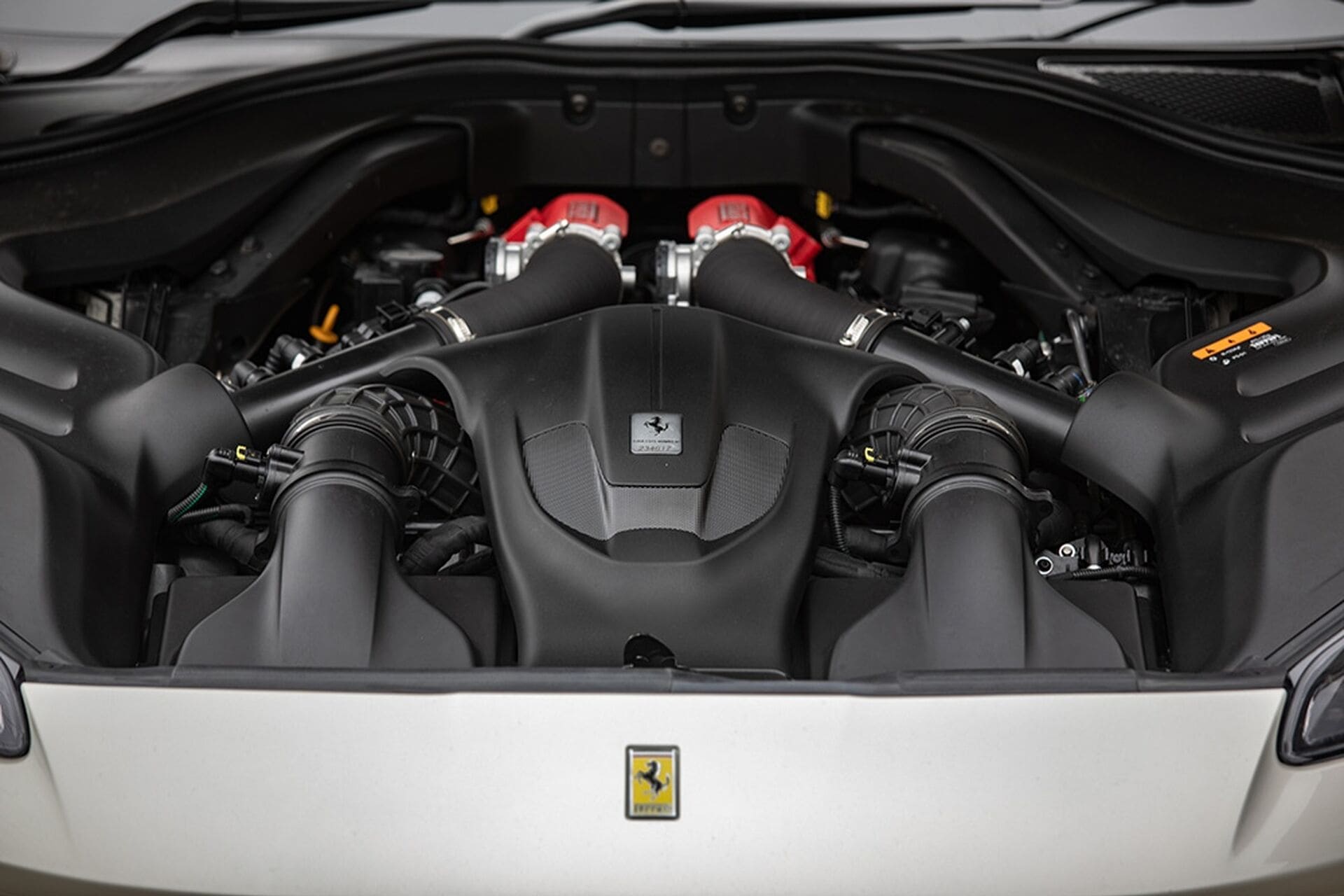 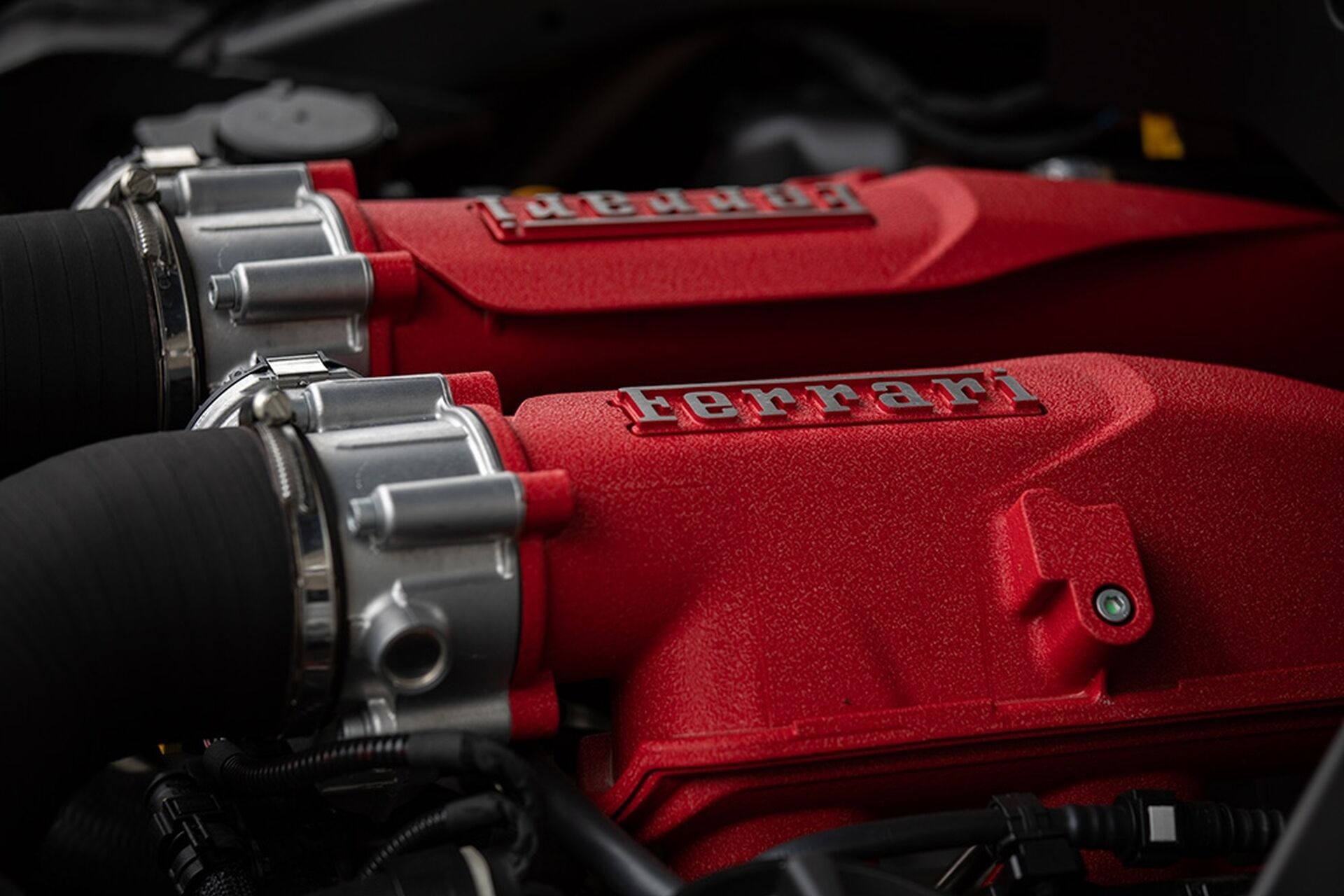 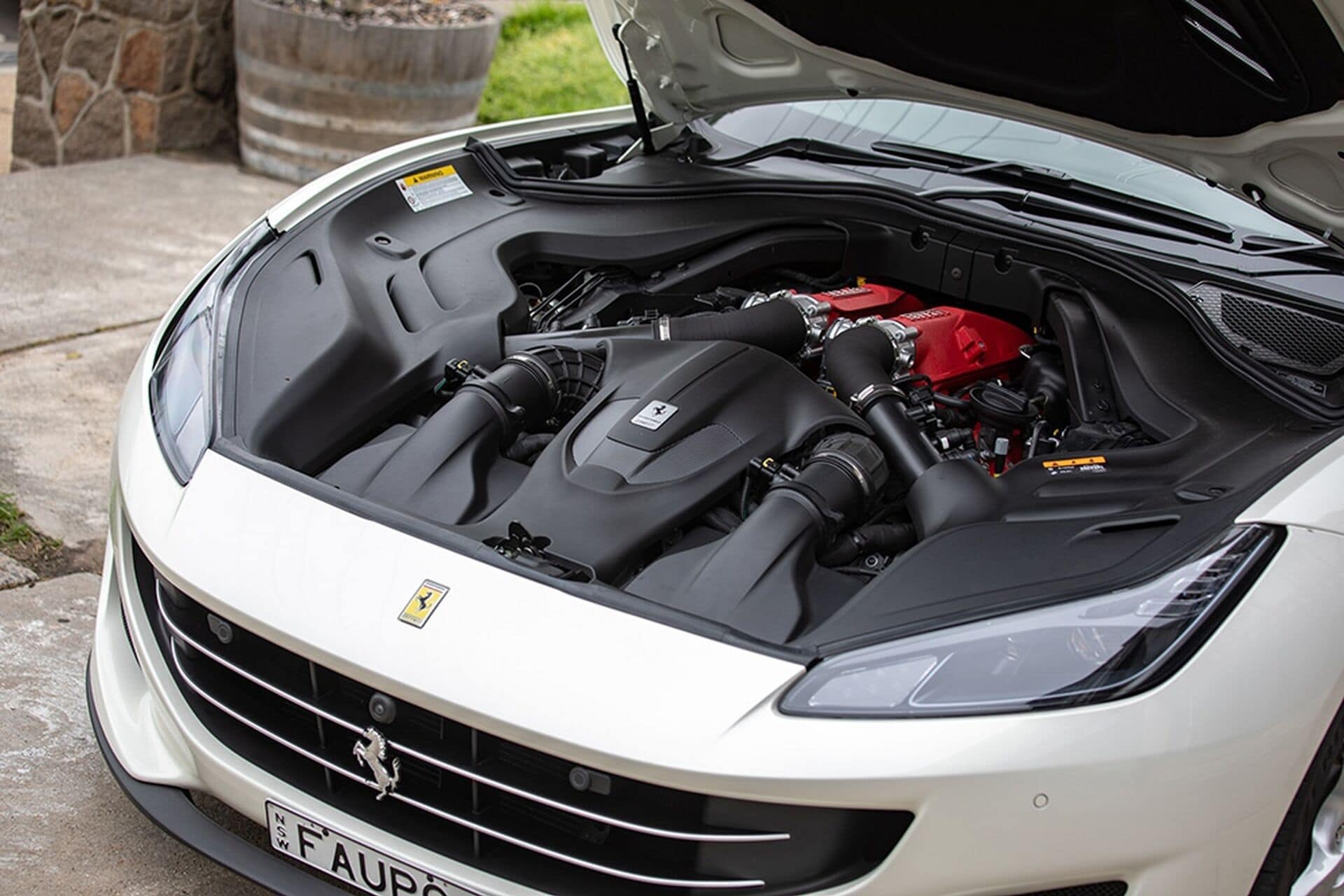 It’s also fantastic at coping with lumpy roads. Yes, it has three different driving modes which change the way the power train, suspension, skid control and steering work, but the really clever part of this car is the damper button on the steering wheel. Push that and, whatever mode you’re in, it will put the dampers into the softest mode, so you can push on hard and ride the bumps softly.

Its body control is so good that we could comfortably fling it through a series of corners, though which and the car hunkered down and blasted through effortlessly. Around town, the turning circle is conveniently tight. And the sound is amazing, despite what people say about turbos having diminished the exhaust note of naturally-aspirated engines. The Portofino sounds just fine.

In short, you can’t disrespect this car. It might be the least-expensive of the Ferrari line-up but you can’t think if it as “just the base model”. Overall, the Portofino gives almost super car performance without being an angry, aggressive beast that throws you around. And it doesn’t come with the increasingly hefty price tags that the 488 or 812 command. Before on-road costs, it’s priced about $400,000 (though the one we tested carried an extra $81,400 worth of options). Overall, that’s probably a bargain for a car that looks, feels and drives every bit like a Ferrari. And surely that deserves a smile.