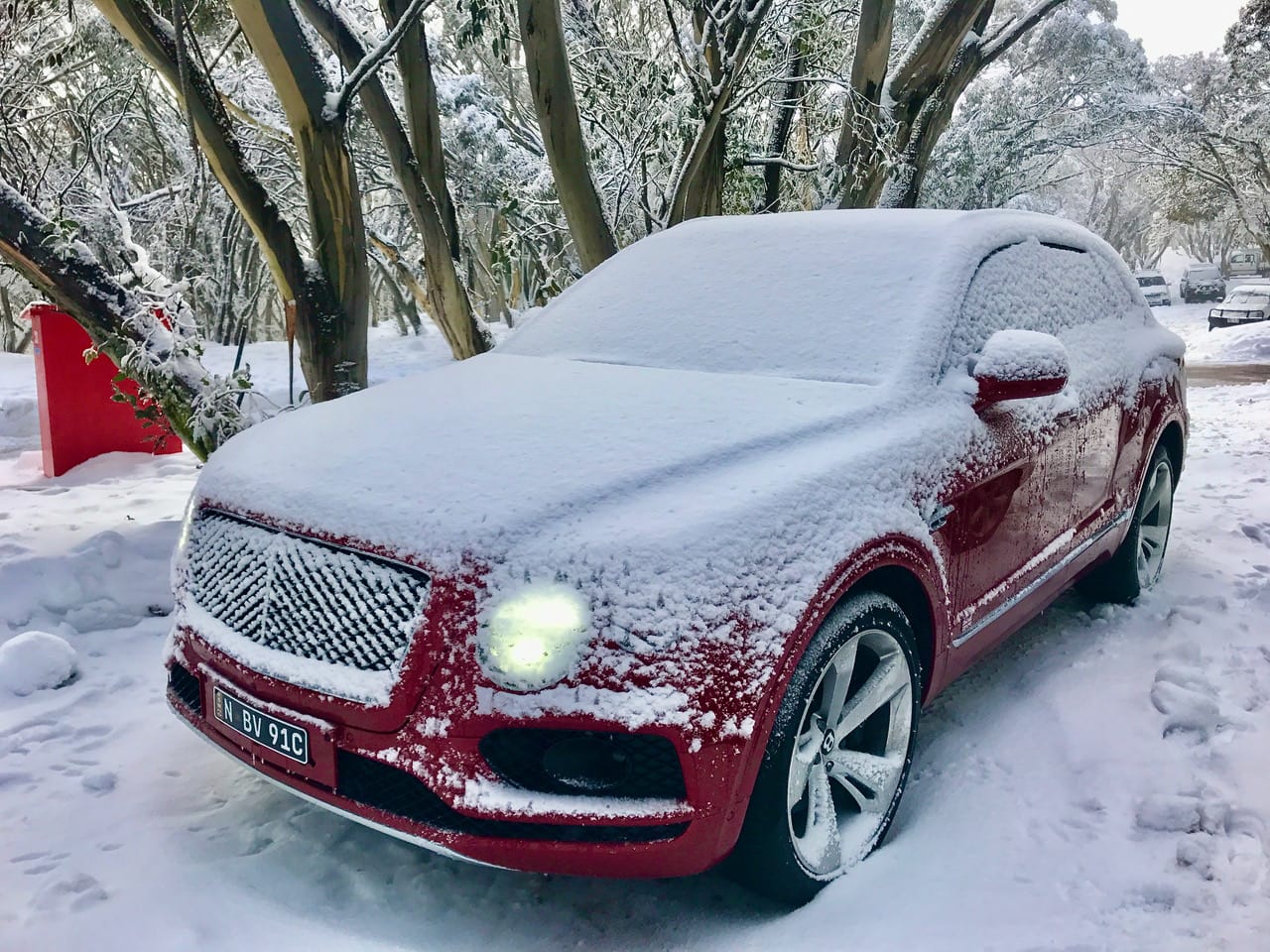 Children may not appreciate the effort that goes into fitting out a half-a-million-dollar car. But when the rear cabin includes a detachable infotainment system and remote-controlled movie setup, they quickly sit up in their fluted Burnt Oak-leather seats and take notice.

So we discovered when road testing the Bentley Bentayga, the luxury sports utility vehicle (SUV) offering from British car-maker Bentley. The first of a flood of new luxury SUVs coming to Australia – and, at this point, the fastest and the most expensive – we were understandably keen to check it out.

Unfortunately, we didn’t have access to a race track during our four days with the 2017 V8 Bentayga Diesel, so couldn’t test its certified top speed of 270km/h, nor compare it to the company’s flagship 12-cyclinder W12 model with its possible 301km/h. Anyway, it was winter and the snow was dumping in the ski fields of the Victorian Alps, so we headed for the hills. Short of using a chopper, this was probably the most luxurious way to travel from Melbourne to Mt Buller.

With all that snow, the destination required a full-sized SUV with adequate hauling capacity and ground clearance along with the luggage space and configuration to handle skis and snowboards. The five-seater Bentayga Diesel variant managed to deliver on all that (though can be ordered with four or seven seats, too). Good to know. But the minutia is what sets this SUV apart from any other – by a long shot. The opulence of its interior is breathtaking, providing more of a sensory experience than simply a mode of transport. This is a high-riding four-wheel-drive vehicle that makes you feel like you’re driving around in a six-star hotel that’s all yours. Think of the Bentayga as an immaculately appointed penthouse compared to the Range Rover’s nightclub. All it’s missing is a concierge service.

The vehicle as standard, however, is missing a bunch of things that should have been built in to make this SUV worthy of the spend. And most of those extras, of course, come at not-insignificant additional costs. We’re not talking about the $7300 front-seat comfort upgrade that brings ventilation and massage into the mix, though that would be nice. No, we mean the simple things like parking assistance and camera support – essentials for reversing in town, surely. But no, they’re part of a “City Specification” package costing more than $11,300. On the road, adaptive cruise control (heaven!), head-up display and lane assist also seem deserving of automatic inclusion in a car of this stature (“Touring” specs, by the way, which will set you back another $16,000-plus). The show-stopper interior of Madam Wheels’ variant was finished with a $40,812 optional Mulliner Driving Specification which includes the identifiably Bentley diamond-stitching detail and embossed Bentley emblems on the leather, plus drilled alloy sports pedals, among other things.

When Madam Wheels drove the thrillingly fast W12 petrol version of the Bentayga in June, 2016, one of its most wonderful features was the heated steering wheel. This may not sound like a big deal, but, like bare feet on heated floors, handling that hand-stitched leather steering wheel felt like the height of winter luxury (a $937 option). Not that these minor adjustments to the bottom-line are likely to test anyone at this level. Nevertheless. 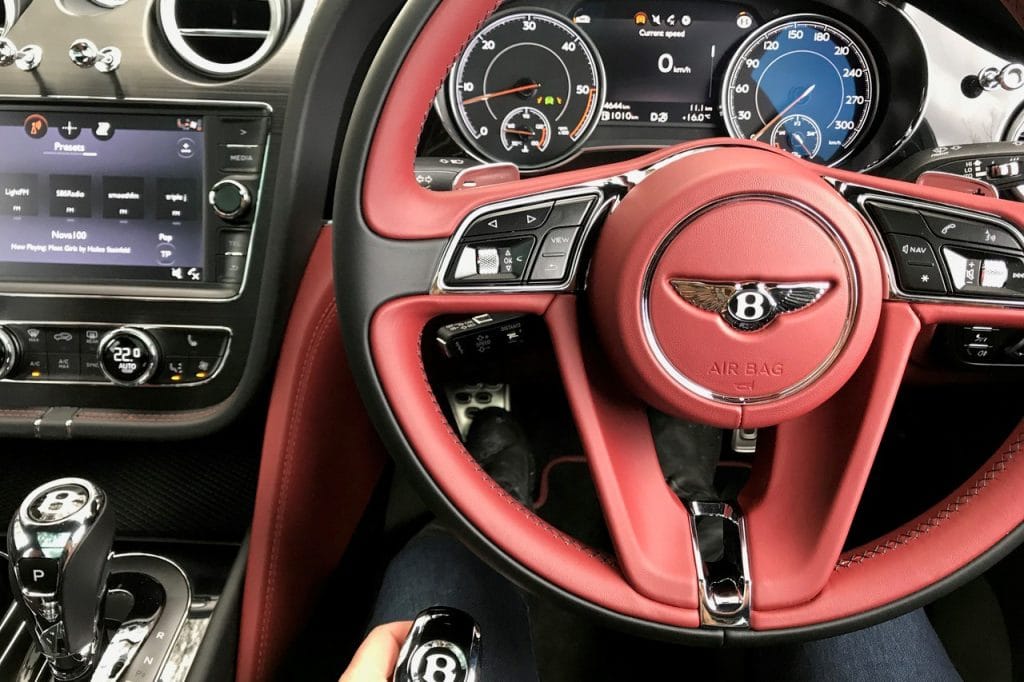 So, back to the children, who were sequestered securely in the Bentayga’s rear cabin trying to work out the car’s 4G wi-fi, Google Maps and Apple Carplay capabilities. Miraculously, such distractions (access to which costs $14,000) had prevented the usual protracted battle for front-seat honours. If only our First-World problems could be solved with such simplicity.

But thoughts of Donald Trump and Pyongyang were far from Madam Wheels’ mind as she piloted her loaner Bentayga north from Melbourne towards the Hume Freeway. She was more interested in seeing how this 2.5-tonne behemoth coped with challenging alpine conditions in a season of record snowfalls – a season punctuated by road closures and ungainly vehicle departures from the winding and icy roads.

The Bentayga represents the first diesel model in Bentley’s near 100-year history and, as you’d expect from the prestige brand, there is nothing truck-like in the way this baby goes. If you don’t mind the odorous pump, passengers would be hard-pressed to pick this as a diesel variant. And with a range of 1000km, it provides that rare blend of performance, practicality and luxury. 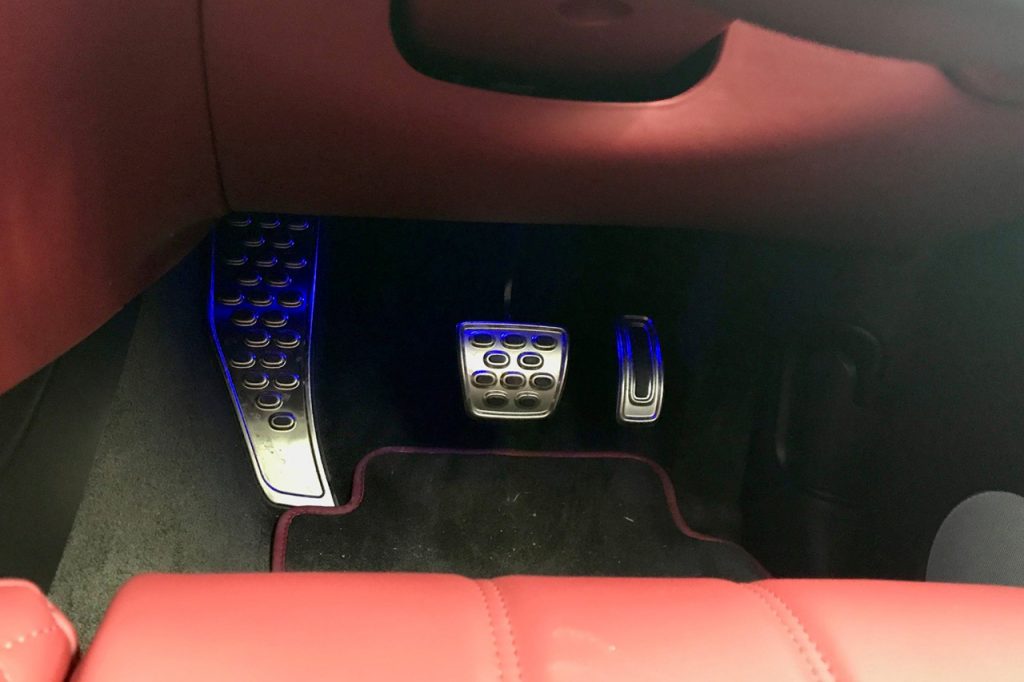 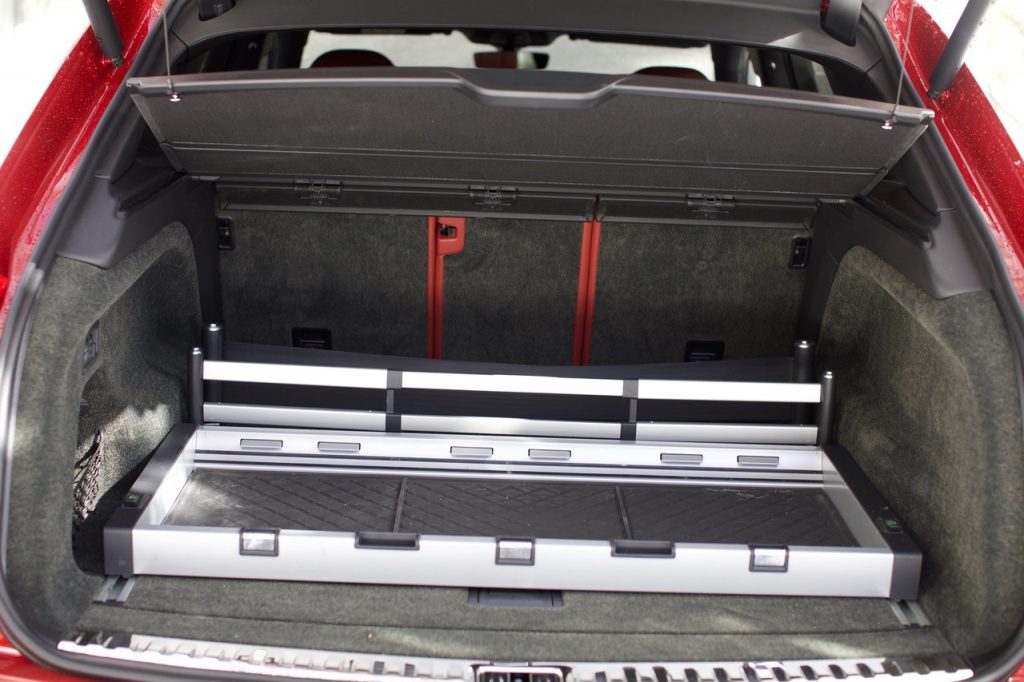 Around town, the Bentayga attracts attention even though it’s a little bull-nosed and quite austere-looking. The ride in Comfort mode was smooth and sleek on the sizeable 22” alloy wheels which, on this car, were painted in piano black veneer to match the menacing black grille. The air quality was good, too, due to an automatic recirculation sensors which detect nasty fumes and shut them out.

On the freeway, the engine opened up without delay – turbo lag of any description would have been a massive let-down in a car like this. But there’s virtually none of it here thanks to an electrical compressor. Punch it, and the thing flies with barely a hint of its weight.

It did feel heavy in fast-switching corners, however, producing boat-like swaying when taking twists and turns at speed. Perhaps the car’s not meant to be driven like that, suggested the 12-year-old still sequestered in the back seat. The reaction was better in Sports mode, but those who want a more civilised experience might consider the $10,699 option of the Bentley Dynamic Drive suspension system. Actually, you have to have it.

As night closed, the automatic high-beam lights picked up tail- and headlights ahead at least a half second faster than us or any oncoming vehicle could react to, dipping then raising again once the coast was clear. 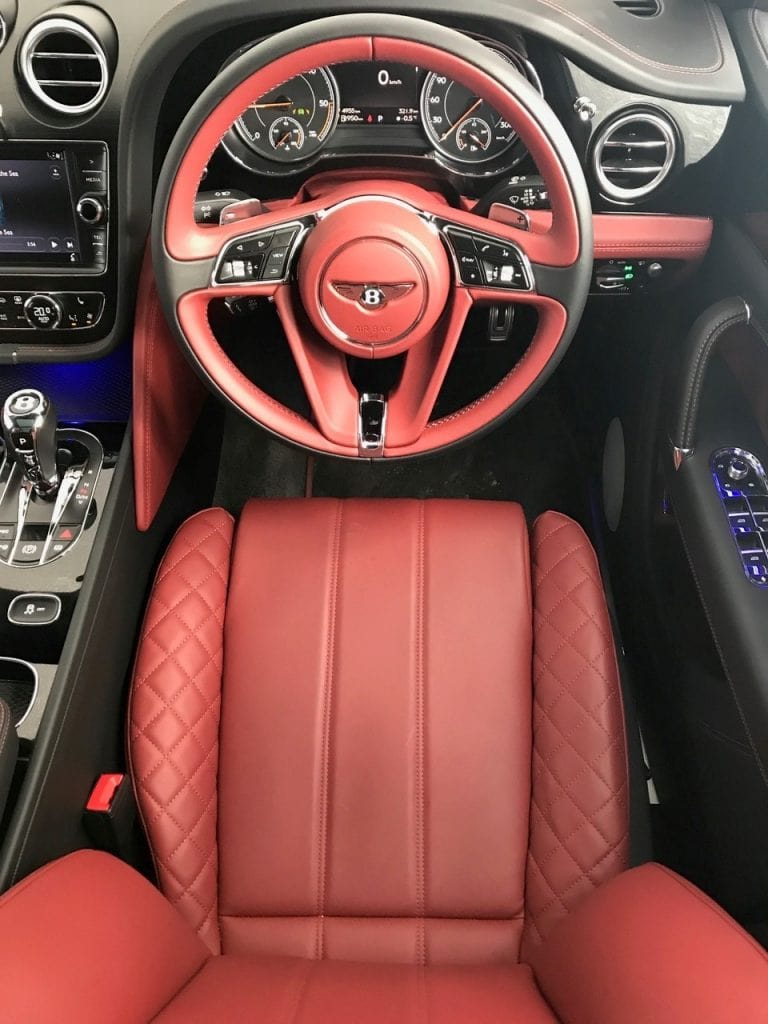 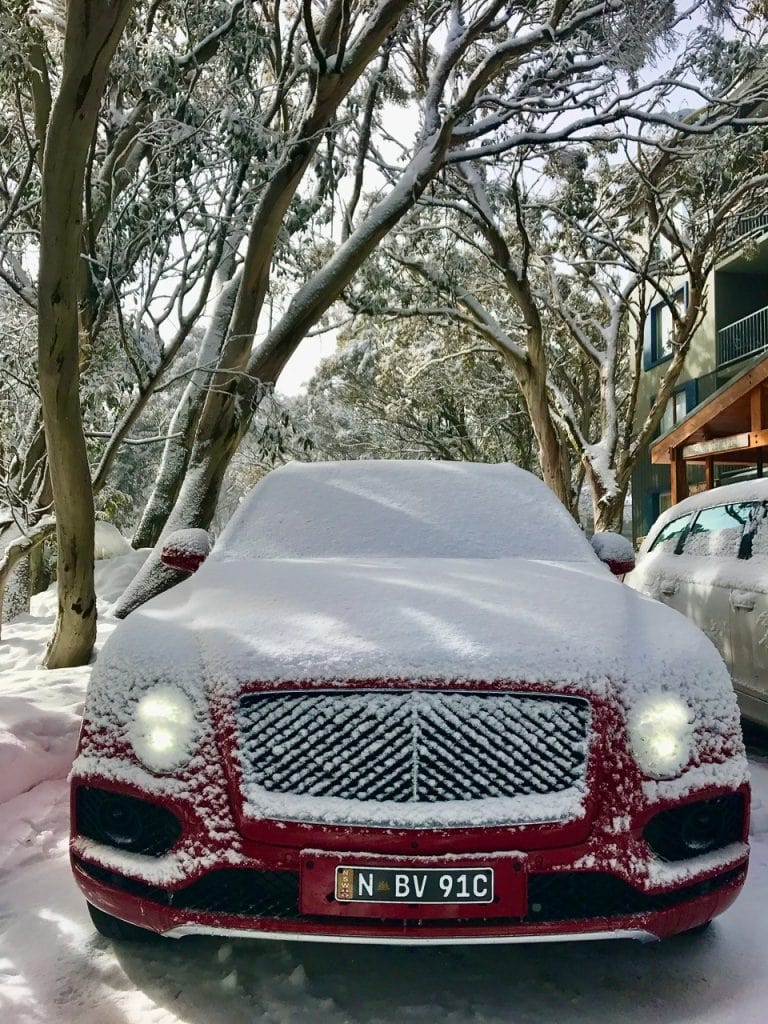 Arriving at Mt Buller after serious storms through the week, no chains were required but the standard tyres were not really up to the task of dealing with the snow pack. The optional “All-Terrain” drive mode specification would have come in handy.

The next morning, the Bentayga’s metallic Dragon Red II paint job (part of an extended range, adding an additional $11,798 to the bill) made it a true ruby-in-the-rough up the hill – even among the not-too-shabby line-up of rides parked around it, largely from Land Rover, including Range Rover Sports and Vogues, a Discovery or two, and a pair of Audi Q models, a 7 and 5. Welcome to Mt Buller, a ski resort that’s about as chi chi as it gets in Australia.

But are you really going to spend $500,000 on a car just because the kids like the tech? Well, the Bentayga doesn’t have to be a $500,000 car. The diesel variant Madam Wheels road tested had a recommended retail price, before on roads, of $335,000. In NSW, you could drive it away for around $370,000. But you might end up feeling a little sorry for yourself, as if the luxury car you just paid for was less luxury and more a shadow of what you would expect a Bentley to be. You need to buy those options. Alternatively, you could pick up a well-optioned second-hand W12 with low mileage for around $400,000.

If this is the space you play in, there really isn’t anything in the market that comes close to it. Bentley reckons when you drive your Bentayga, you won’t want to be anywhere else on earth. And we have to agree. 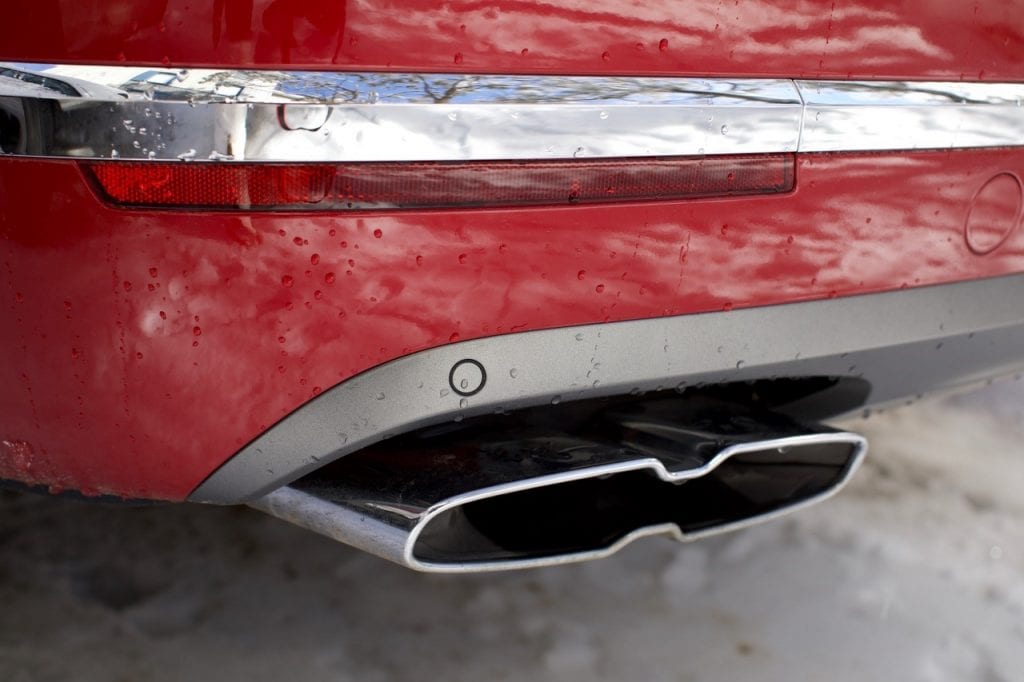 Madam Wheels verdict: You have to see it to believe it. It’s an absolute stand-out. Opulent beyond compare.

Buy: If you’re loaded and you’ll use it to share awesome experiences. Consider the Linley Hamper by Mulliner (HL)

Avoid: If you first want to try other incoming luxury SUVs from Lamborghini and Rolls-Royce Motor Cars.

Dislikes: The boat-like roll in cornering plus the ride was “a bit bumpy”; kids didn’t like the fact they would NEVER be able to eat food in it.