QANTAS’ Valet car park is home to a pretty impressive lineup of vehicles most days of the week. But when Porsche decides to use it as the start point of a drive event, things get switched up a notch. So it was early this week when Madam Wheels arrived at Melbourne Airport to join an Australian media launch of the brand’s medium-size SUV, the Macan S. A fleet of vehicles were lined up awaiting our inspection in the usual shades of silver and gun-metal grey along with a few pops of colour dubbed Miami Blue, Mamba Green, Carmine Red and a mahogany hue which might best be left on the palette board.

I was skeptical about the Macan when it was first introduced to Australia in 2014, believing like many others that it would dilute the brand’s rarified prestige sports-car allure. Whether it has or not remains a moot point because, not only did the Macan immediately become Porsche’s best-selling model by far, it appears to have single-handedly saved the brand from certain death. This was my opportunity to find out how. 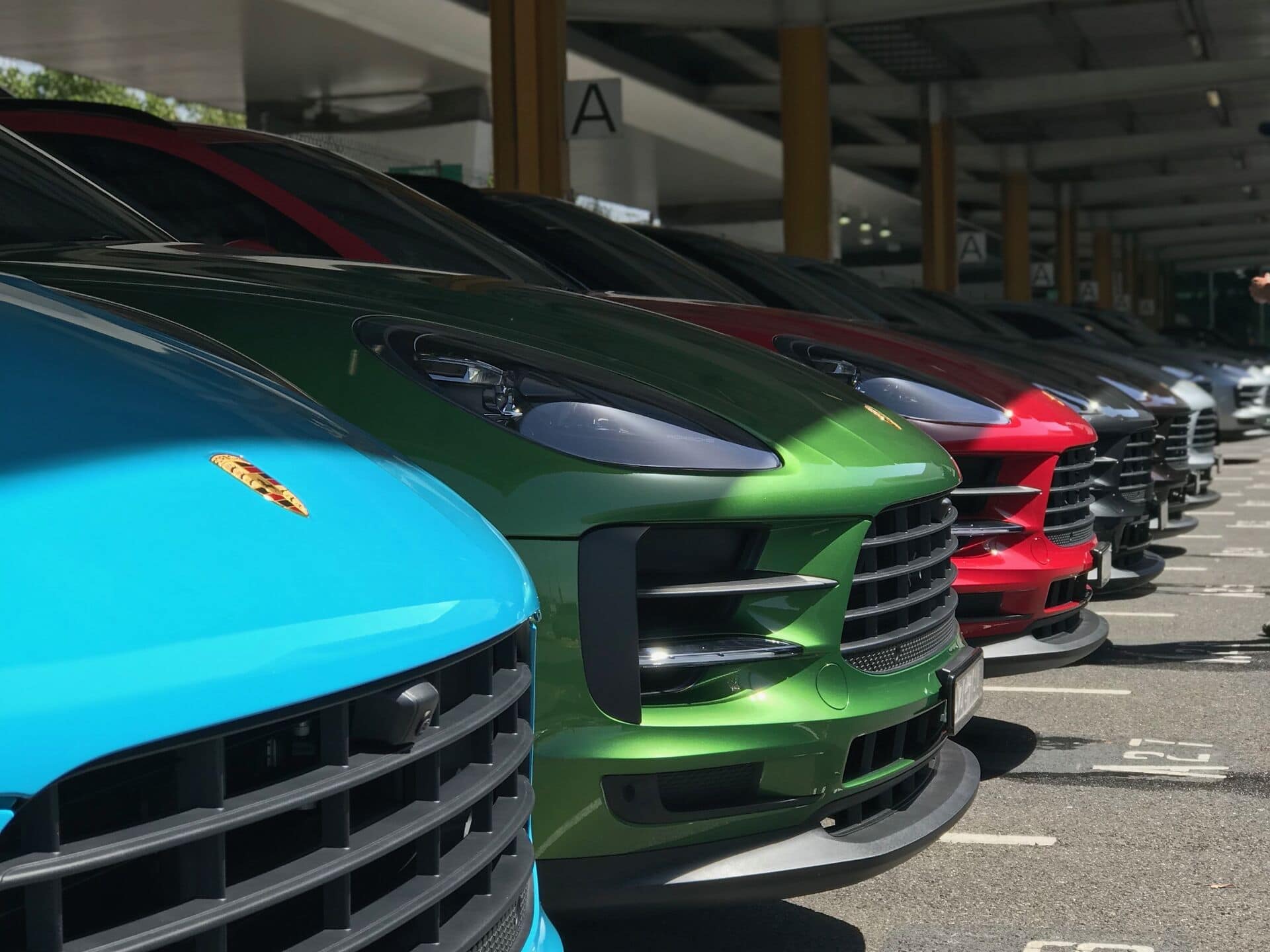 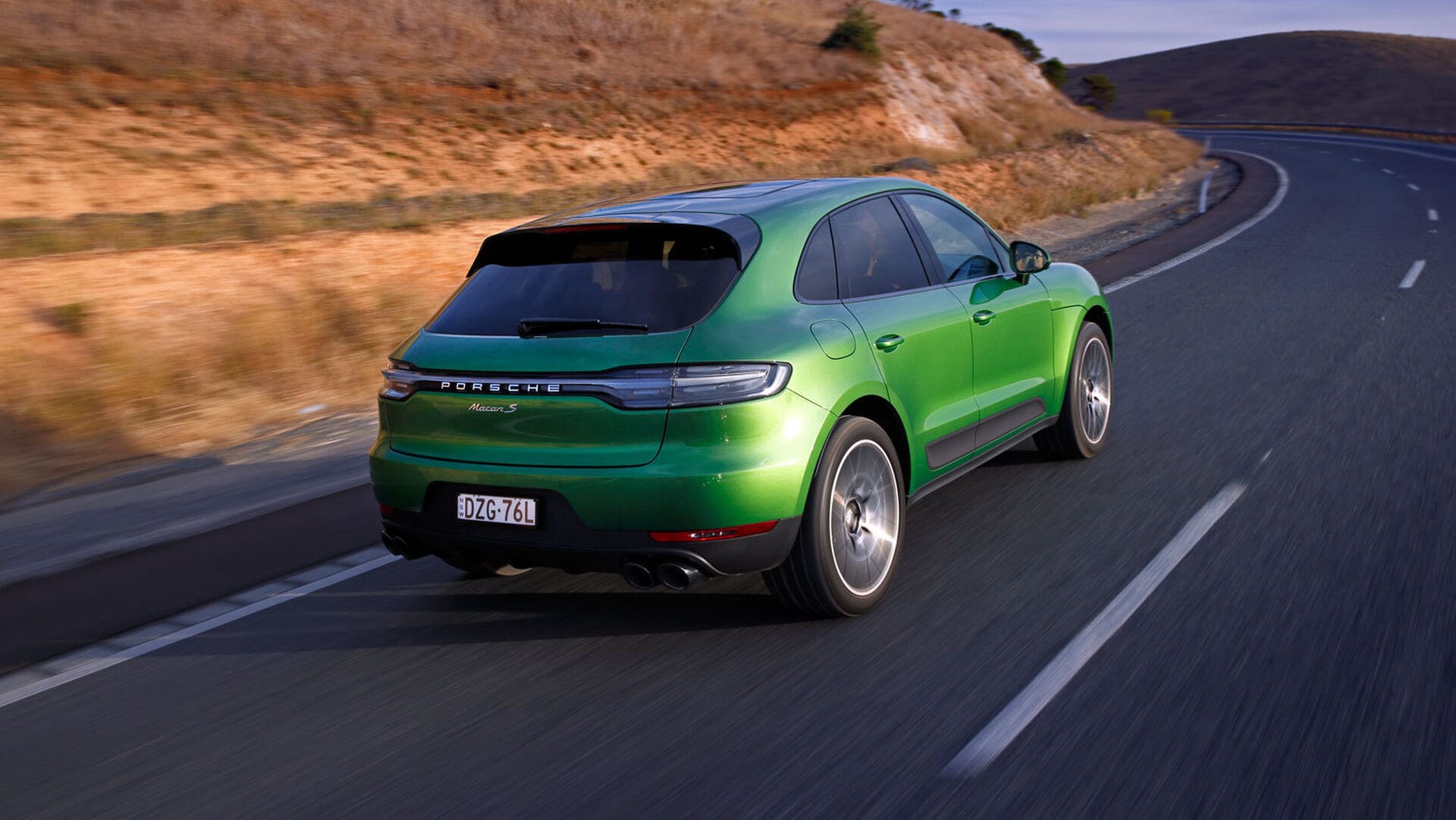 Porsche’s chief drive instructor for the day explained during a pre-departure briefing that we’d be driving the Macan on varying road surfaces, often through unexpectedly sharp and tightening corners, and along roads which may at times entice us to drive beyond the posted speed limits. This was actively discouraged. It was disconcerting then to be introduced to the team’s paramedic who would be travelling in convoy with us. Just in case.

‘The model we experienced constitutes a face-lift rather than a full-blown make-over. Still, you can option it with what sound like paparazzi-proof windows.’

Our destination was the award-winning Mitchelton Winery, at Nagambie, just over 100 km north of Melbourne. Already an established and highly regarded architectural icon in its own right, owners Gerry Harvey, of Jayco Caravans, and his son, Andy, added a hotel to the site last year in an effort to boost tourism to the Goulburn Valley. The resulting ultra-sleek digs by architects Hecker Guthrie, though modern, respect the heritage of the winery and blend harmoniously with the surrounding Australian bush land. The hotel is also cleverly positioned to take advantage of spectacular views over an aesthetically-pleasing pool towards a bend in the Goulburn River. We drove along a meandering route that had been pre-installed into our cars’ navigation system. This was displayed on an up sized 10.9-inch touch screen which runs the usual suite of in-car features as part of Porsche’s Communication Management system. While potentially tricky to get across at first, the system quickly becomes fairly intuitive. 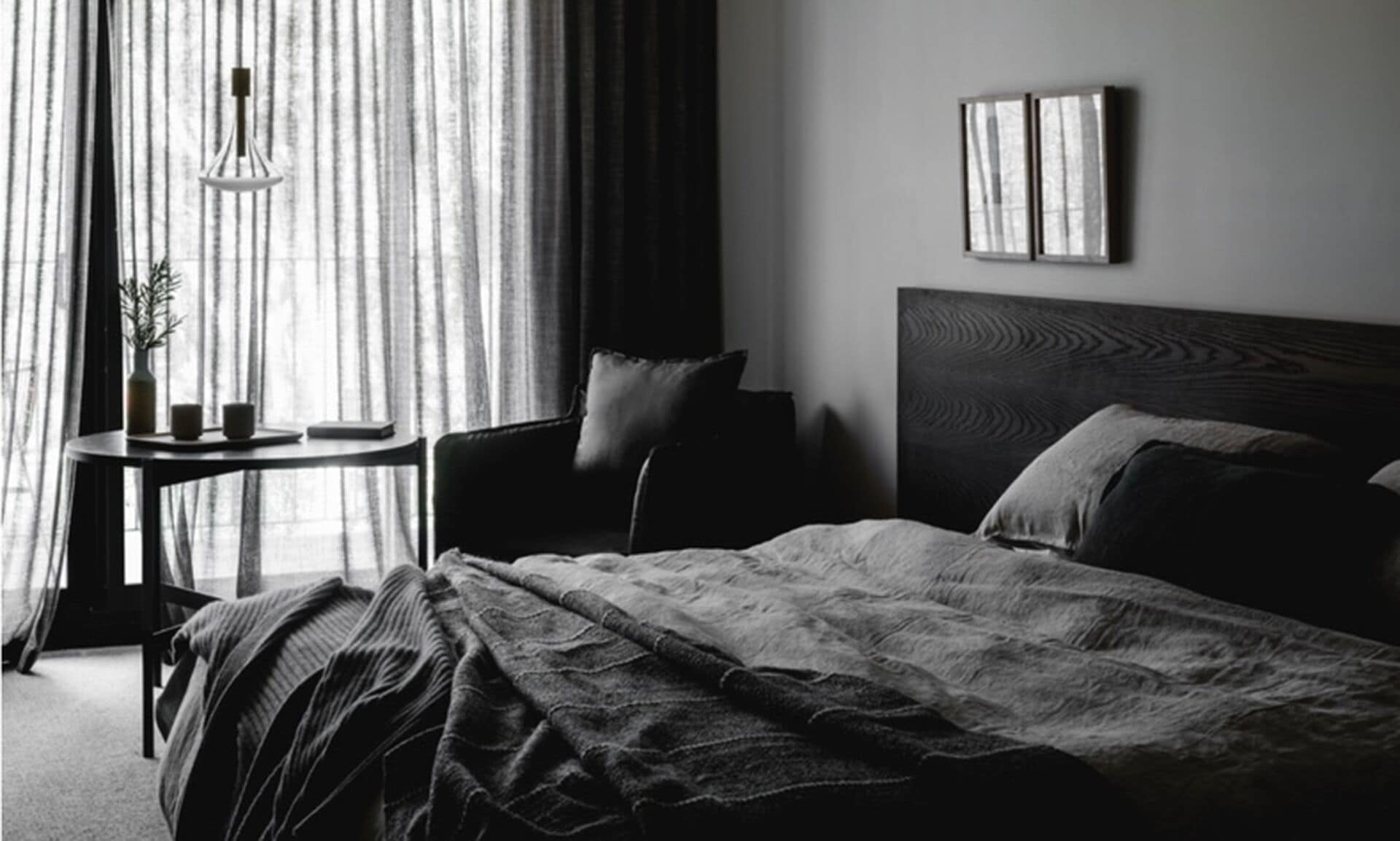 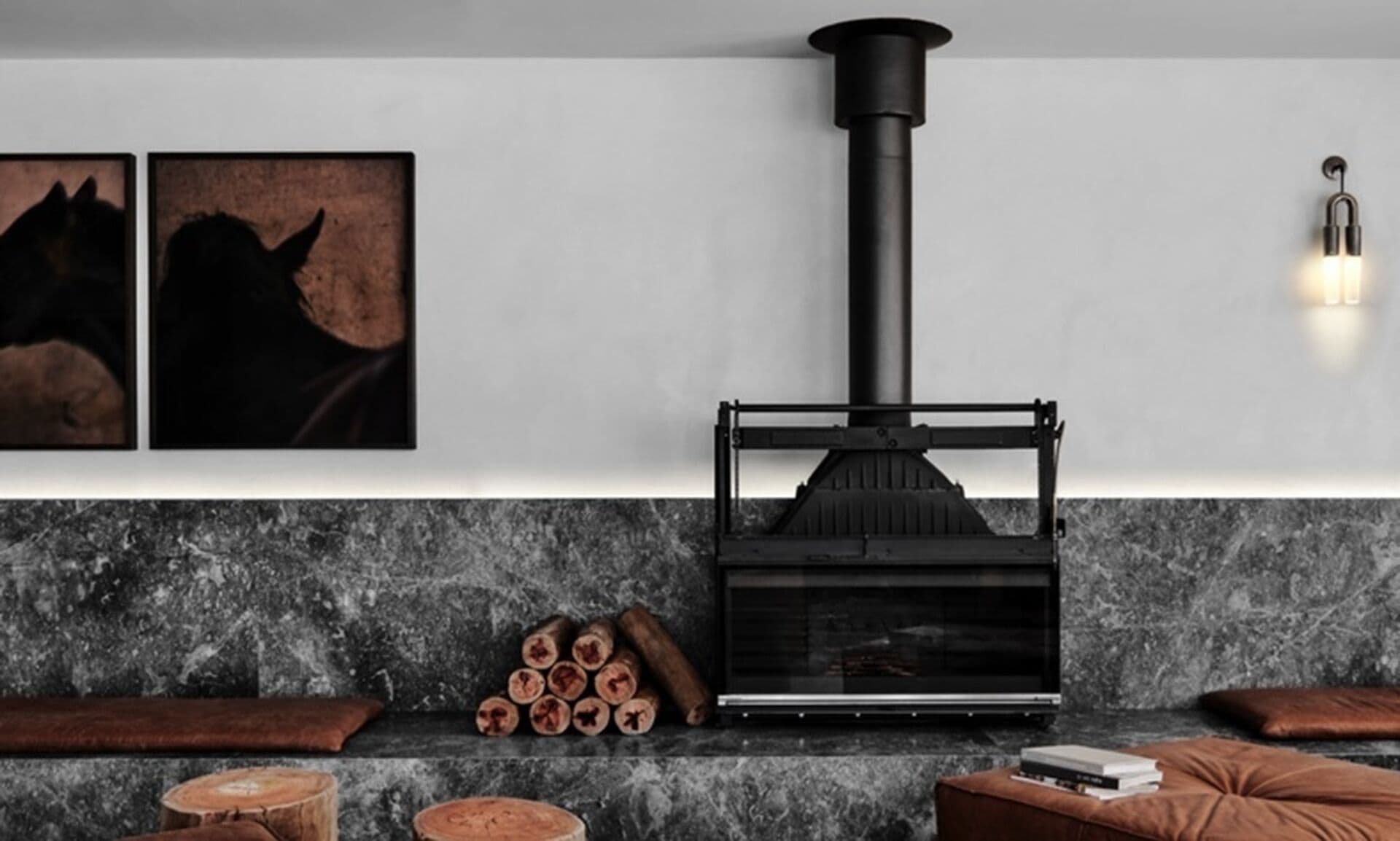 Winding our way through gum trees along narrow country roads, the Macan had the chance to really hit its stride to reveal levels of road handling and precision one would expect of the high-end sports-car brand. The model we experienced constitutes a face-lift to the Macan, so isn’t a full-blown make-over of the car introduced here in 2014. Still, you can option it with what sound like paparazzi-proof windows that provide way more than simple privacy glass. These day they can be sound-proofed and UV-proofed as well to help keep all the unwanted attention and interference at bay.

Not surprisingly the Macan S is powerful, with a new three-litre, turbo-charged V6 engine first devised for the brand’s four-door Panamera. It’s since been integrated into the large Cayenne SUV, too, so has been tried and tested in the pricier high-performance models and obviously received the big tick.Inside, it’s spacious and comfortable, with 14-way adjustable seats standard. You can swap in 18-way adaptive electric sports seats to the front for another $790. Those who find the interior functional rather than beautiful might consider the additional trim finishes and decorative seat stitching package ($10,790). 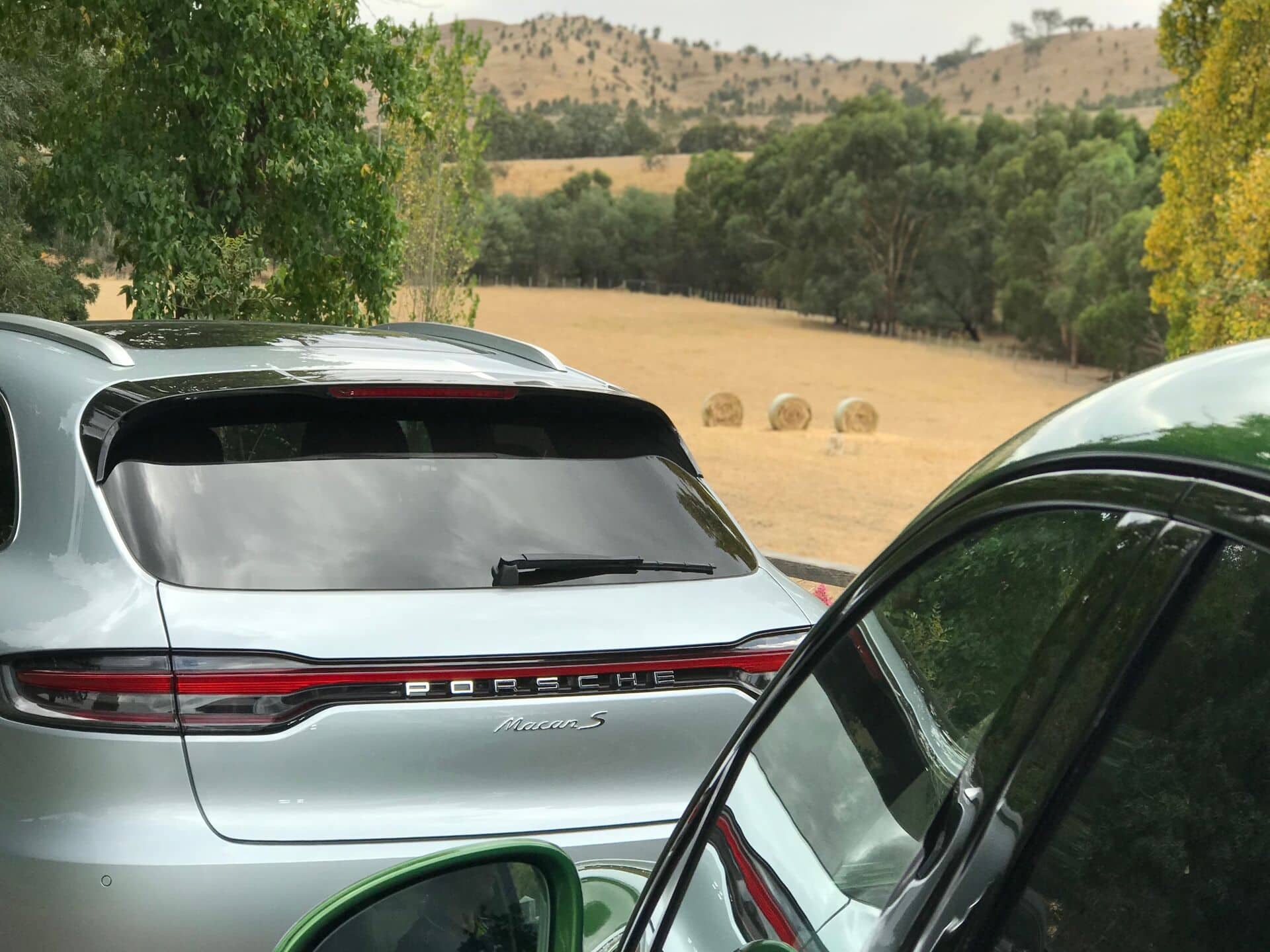 I quite liked the optional GT sports steering wheel that was in the car I drove ($1320, with heating), which included not only a four-range drive-mode switch but also a rather fabulous centrally located Sport Response button (part of an optional Sport Chrono Package $2790). Push it, and the engine’s maximum available performance kicks in, providing an instant-response boost that runs for 20 seconds. It makes overtaking a snap, which is terrific provided you adhere to that bit about staying within the legal speed limit. Good luck with that, though, and be wary of it because you will get booked for speeding even while overtaking. It’s the law until Australia gets Autobahns, and we all know that’s not going to happen any time soon, sadly.

Porsche’s marketing people describe the Macan as the sportiest car in its class, which sounds about right given the competition – probably the BMW X3, Mercedes-Benz GLC and Audi Q5. The latter’s “Black Edit” sports variant feels like the one closest to matching the look and feel of the Macan S package, and it’s about $7000 less expensive. Annoyingly, though, the Macan offers only two colours as standard – black and white. Everything else costs more – $1990 for the Mamba Green on my car, while the Carmine Red or Miami Blue “special colours” also seen here add $5800 to the build cost. 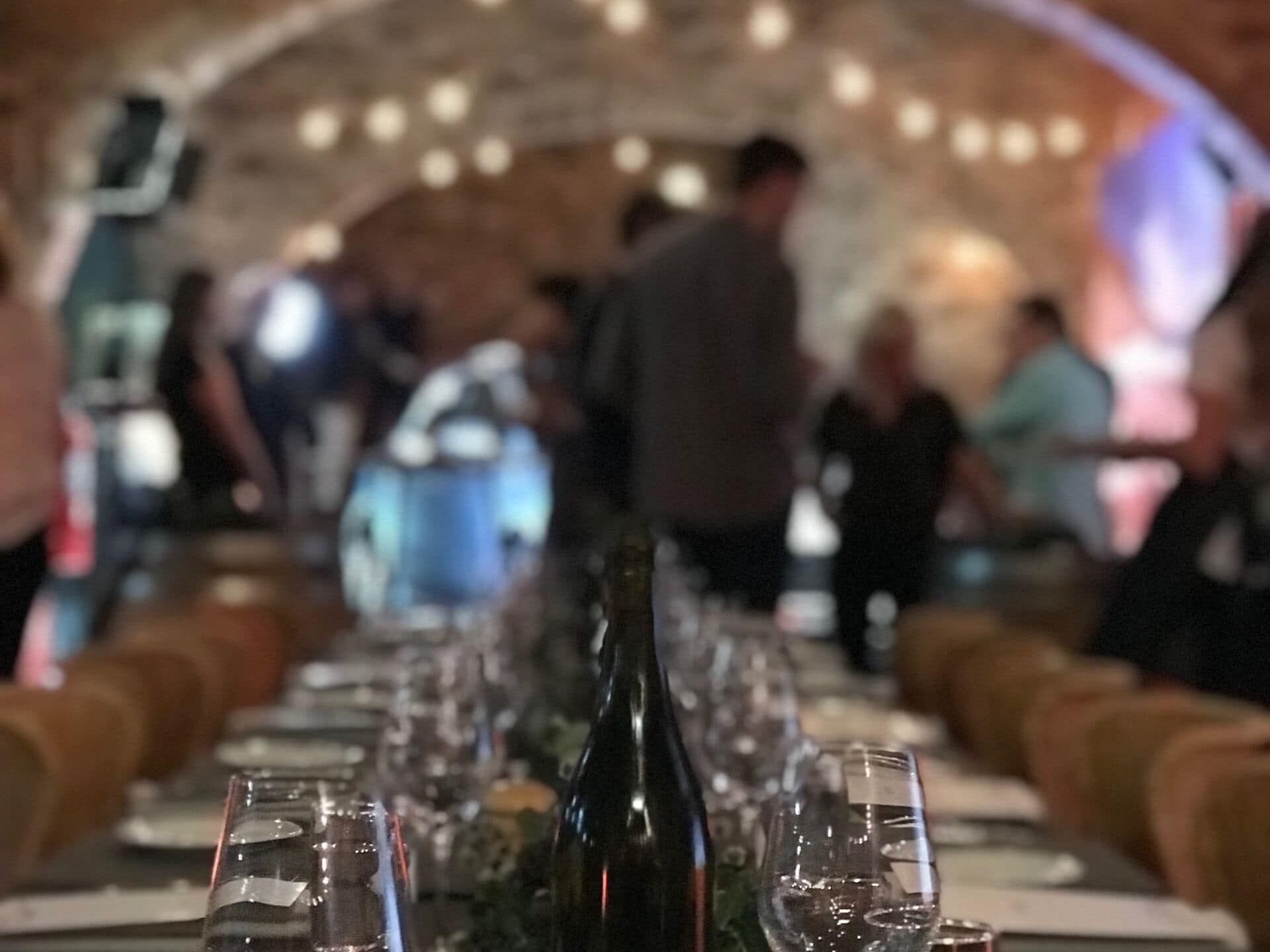 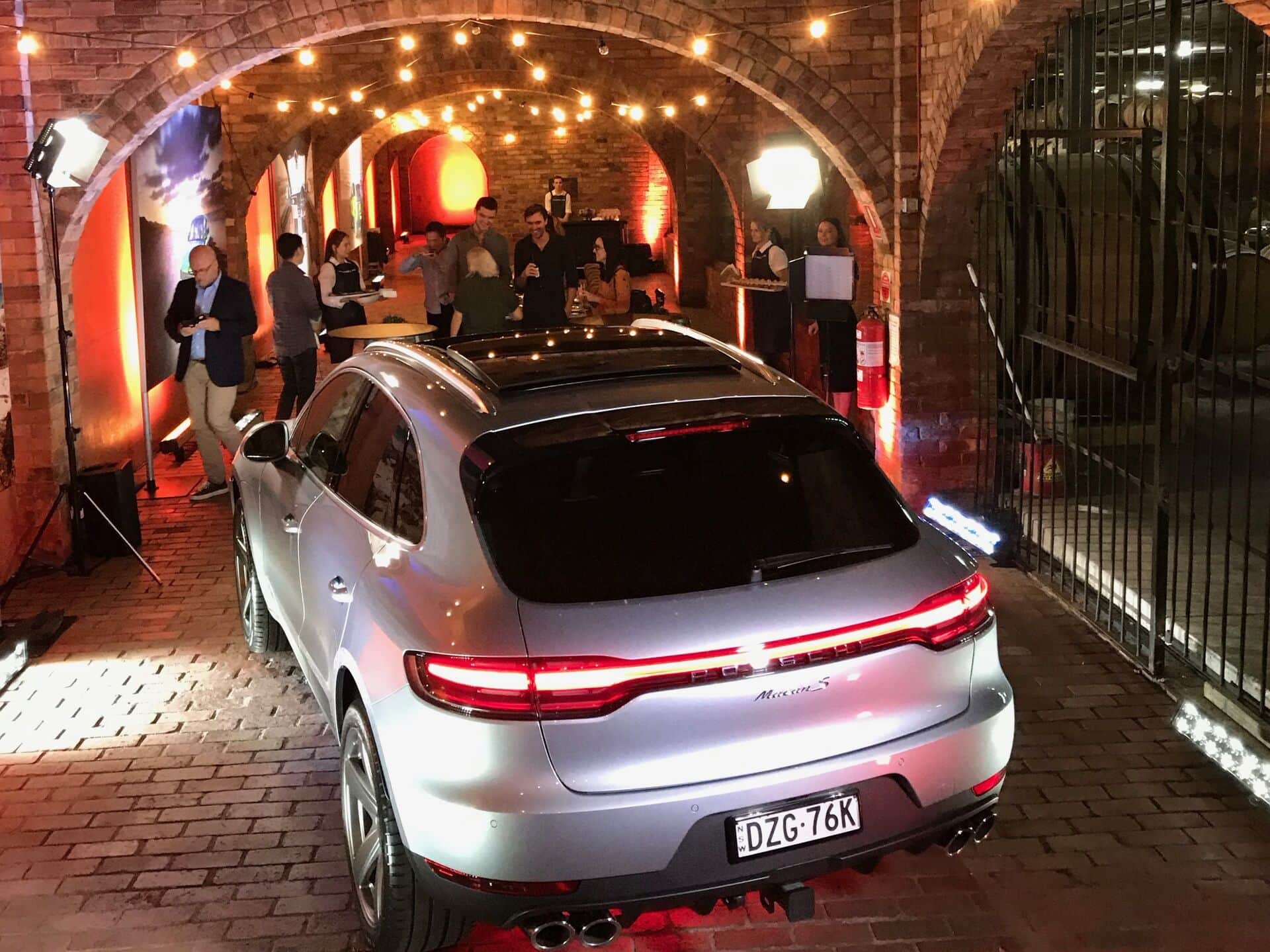 That night, dinner was served in Mitchelton’s bespoke underground cellar which is said to be part of the largest subterranean wine cellaring system in Australia with space enough for three football fields. It didn’t surprise, then, that the path to the loo was a long one but it had an unexpected bonus along the way, leading through a candle-lit stone passageway to a cavernous gallery of contemporary Indigenous art.

Overnight rain had applied a slick film to the roads so, as we took off the next morning, it was good to know Porsche’s optional Torque Vectoring Plus system was on board. This system will become your best friend if you’re into dynamic cornering, improving stability and control on roads with different levels of grip, as well as in the rain or snow.

There are only two cars in the Porsche model line-up that sell for under $100,000 – the Macan and Macan S. The most accessible price-point of $81,400 makes the entry-level Macan available to car buyers who may never have considered themselves as Porsche owners. Which was exactly the point, as it turns out. Porsche had to make an SUV to keep all those 911 buyers in the Porsche family rather than watching them peel off to competitor brands when their own families expanded and their wives started asking for an SUV – Australia’s most popular car of choice these days. As mentioned, that move put Porsche Cars Australia back in the game, moving from a company which, in the late 1990s, used to celebrate if it sold more than 500 cars a year to shifting 4484 cars in 2017 – more than half of them (2478) Macans

So, overall, I’d rate the Macan S as serious but great fun to be in. It’s a high-tech car that’s easy to drive but hard on the wallet given what extras you need to buy in on top of its $97,000 price tag, before on-road costs. 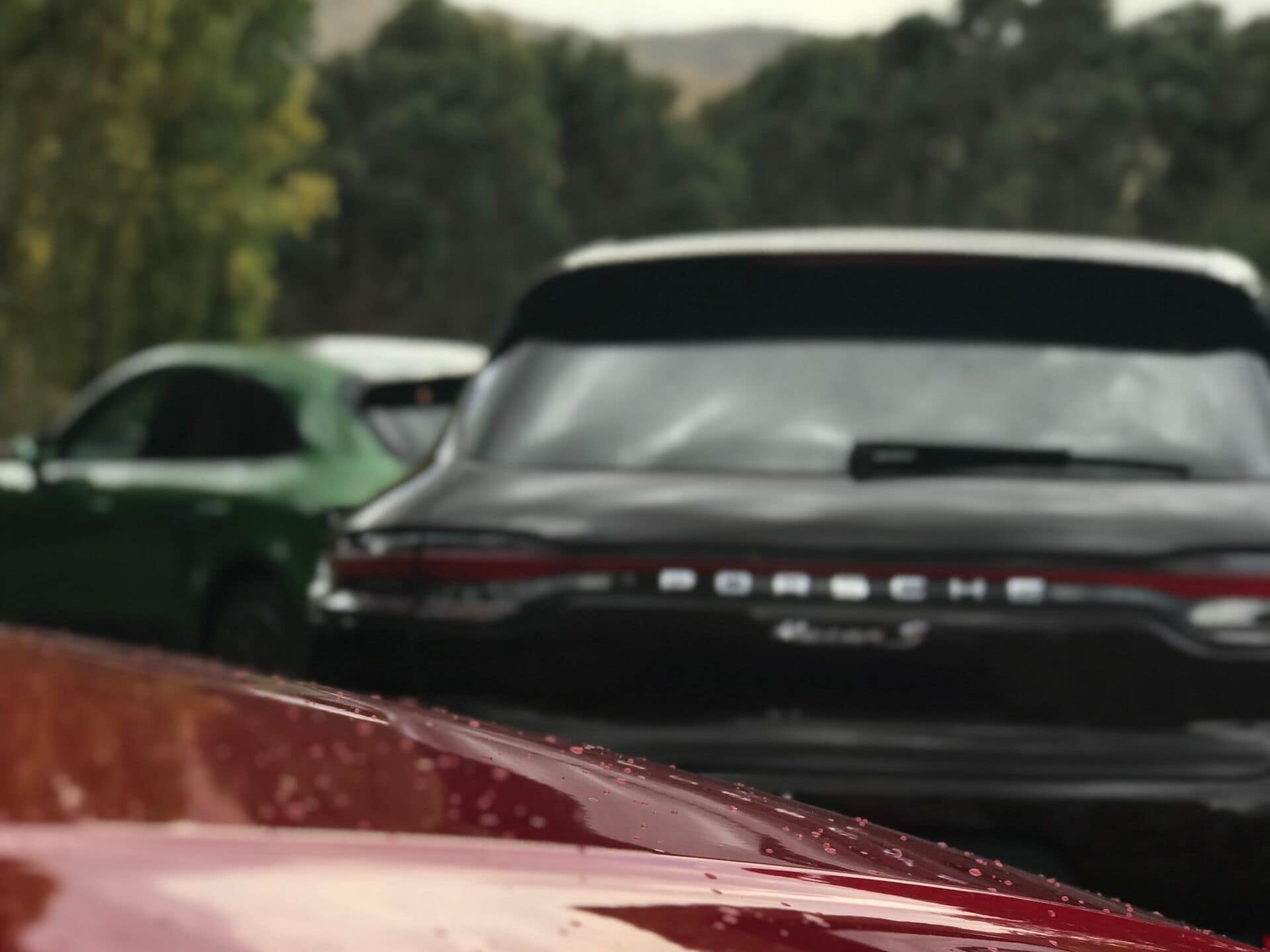 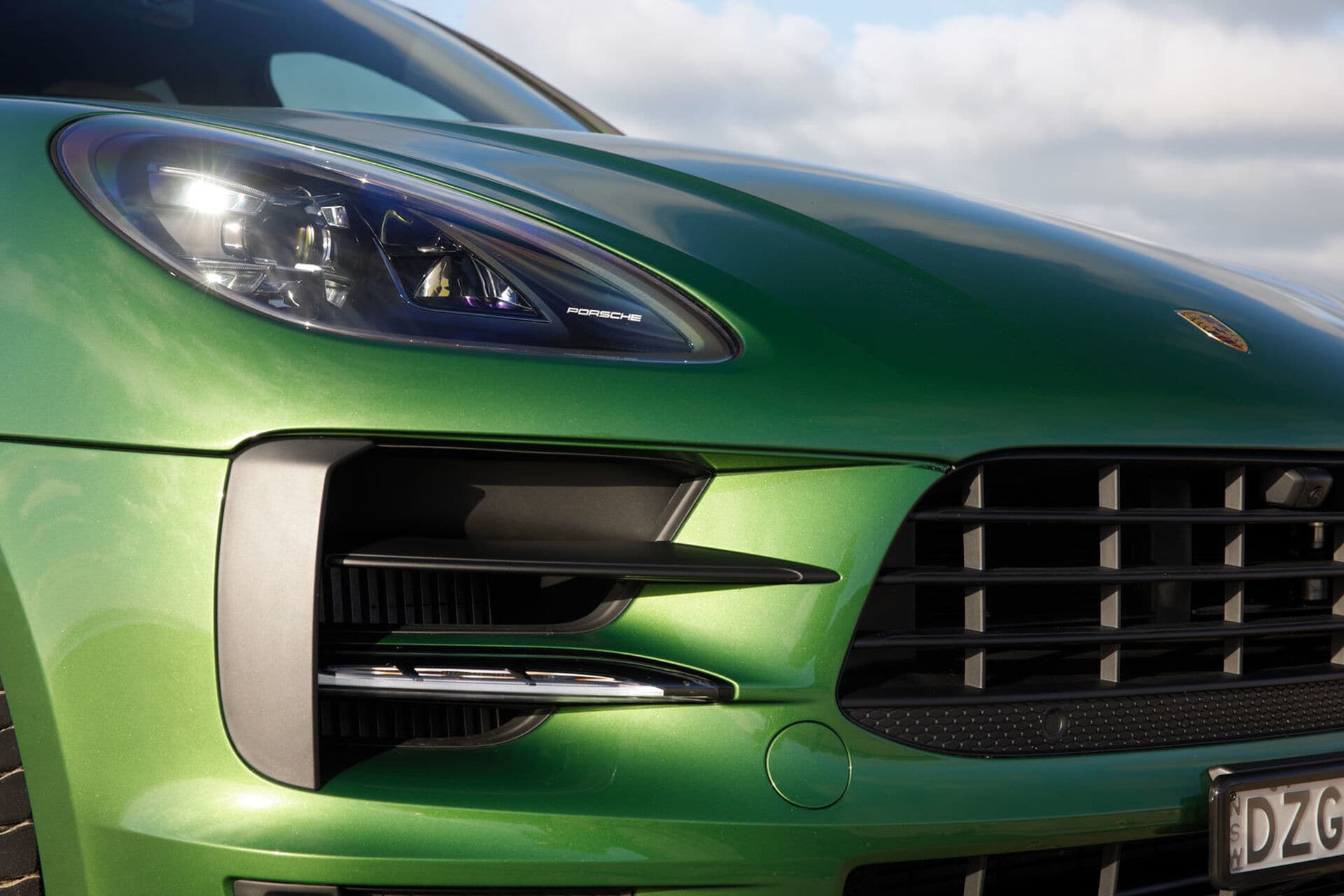 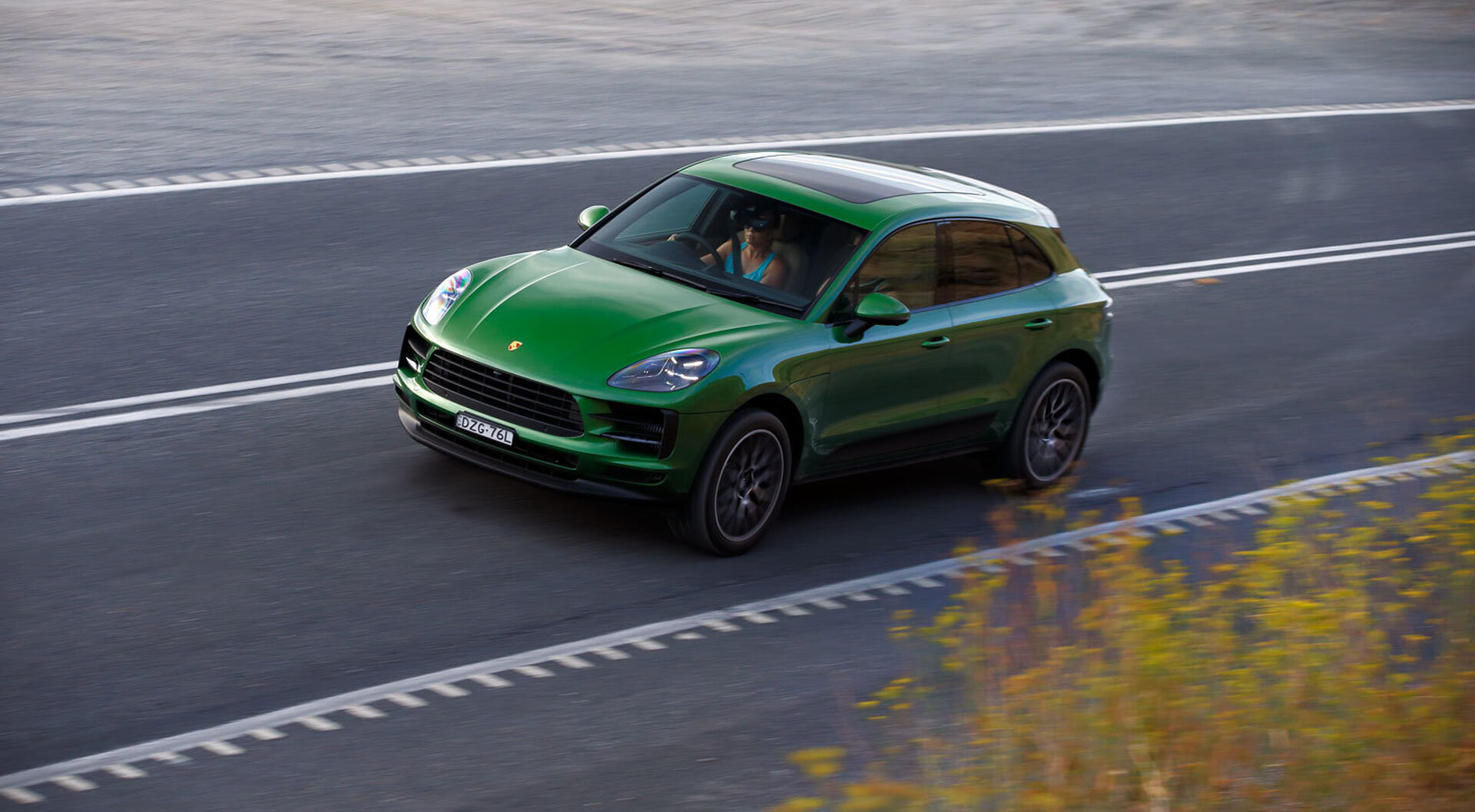